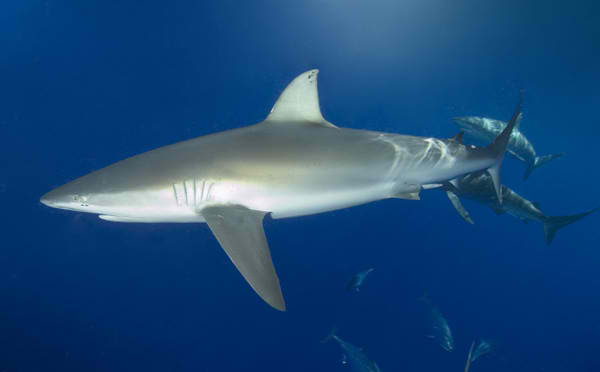 I am aware of this and I know for sure you do. Sharks are swift and silent killers. Many large sharks, such as the great white, have big appetites. They will track down and eat seals, sea lions, and other marine animals. They'll even swallow garbage floating around in the ocean, such as license plates and metal cans. Although most sharks don't like people on their menu, big fish will take a bite out of humans.

Sharks in one form or another have been swimming in Earth's ocean for more than 400 million years. One ancient shark was 52 feet long and had teeth the size of a person's hand. Today's shark are smaller, but they remain on the top of the food chain in the sea. A close look in their bodies shows why they are such hardy survivors. From nose to tail, they packed with sensing equipment that helps them locate their prey.

A shark can smell even a tiny drop of blood in the water from hundreds of yards away. It can detect one drop of blood in one million drops of water. That's the same as smelling a teaspoon of juice in a swimming pool.

Small opening in the shark's skin called electroreceptors detect tiny electrical fields created by the heartbeat and muscle movements of other fish. This lets sharks hunt for prey that might be hiding under sand.

A shark can see in dim light because its eyes are about 10 times more sensitive to light than human eyes. Some sharks have membrane that covers and protect the eyes when it attacks prey.

Tiny holes on the top of the head lead to very sensitive ears. A shark can pick up the sound of a struggling fish more than 800 feet away.

A row of vibration-sensitive hair cells runs along the shark's sides. They allow a shark to sense the faintest motion of a fish from about 3 to 10 feet away.

Sharks are hungry even before they are born. When they are inside the mother, sharks develop teeth. Sometimes one unborn shark will eat its unborn brother and sisters.

Thank you for reading Sharks Finding Its Prey posted on the website Kwentology if you want to redistribute this article please include the link as the source. Have some kuwento to share? Contact us!