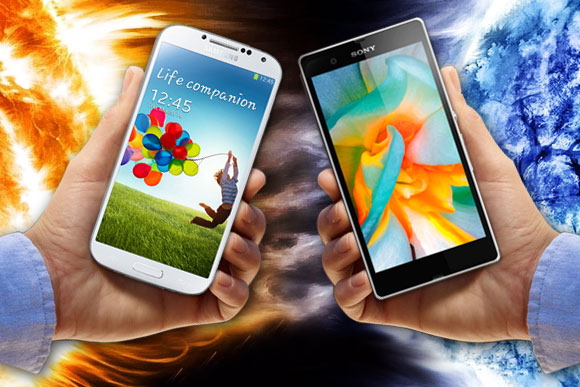 Since the Sony Xperia has been launched it is at the top spot but its rivalry was ready and many have questions that can Samsung galaxy S4 Topple it? This year SonyXperia Z was one big launch but soon came the Samsung galaxy S4 that stood against it. People, who have decided to purchase a new handset for them and who are confused between the two heavyweight champions,will be able to take the right decision with this review.

Both the phones are quite similar in the design. Theone has the pebble like shape and other has square and sharp edges, which you can easily decide according to your choice. The fact here, which can help you, is that the Xperia Z has large glass and is dust and waterproof on the other hand Samsung S4 is mostly plastic.

Both the smart phones are big with 5-inchscreen. The Xperia is slighter bigger than the galaxy S4 that is 71x139mm and the other one is 69.8x136.6mm. Both the phones are slim 7.9mm but galaxy S4 is much smaller as with the plastic it is lighter that is 130g against 145 grams.

S4 has a 5-inch screen with full HD resolution of 1080x1920. It is the same with the Xperia Z both having pixel density of 441 ppi. In the two smart phonetechnologies varySony uses its own Bravia engine 2 and Samsung uses its superAMOLED. There is very little difference in terms of the two S4 has little brightness to offer, its colors appear more eyes popping, and on the other hand,Xperia offers a more natural look.

Galaxy S4 uses gorilla glass and sonnyXperia has scratch resistant and shatterproof glass. We can say here it is drawn between the two Smartphone’s as both stands parallel.

Sonny has 16 GB model and the galaxy has S4 has 16GB, 64GB and 32 GB.Nevertheless,nowonly 16 GB model is only available. Both the smart phones has micro SD slots the galaxy S4 has 64GB cards as standard and Xperia has 32 GB.

Galaxy S4 internal memory has almost taken up by the operating system and currently lacks some of the features. Here Xperia Z takes a lead.

In terms of the specification and cameras, both the phones are the same. Both have 13 MP rear facing cameras and hold the ability to shoot full HD quality 1080p. The galaxy has 2Mp and Xperia Z has 2.2 MP. The both can record 1080p videos. There is a slight difference in the quality here.

S4 has larger battery as well as removable about 2600mAh battery and the SonyXperia has a 2330mAh non-removable battery. Nevertheless, this does not conclude that Samsung offers longer battery life. Both the Smartphone offers equal battery life. With these two, you will get two days use. Onceagain, it’s a draw here.

Claudia is a freelance writer and she has written many articles and blogs on Datastage Online Training and much other training online. She has been in this industry for many years now, follow me on Twitter, Facebook & Google+.

Thank you for reading Samsung Galaxy S4 vs Sony Xperia Z Comparison Review posted on the website Kwentology if you want to redistribute this article please include the link as the source. Have some kuwento to share? Contact us!

for me , samsung galaxy is best !!