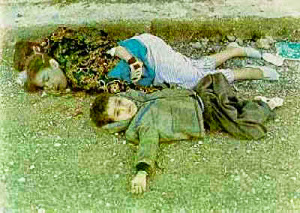 Squids may save humans from chemical warfare! We’ve all heard what's going on over in Syria—its tragic people are dying left and right. One of the main culprits is the chemical agent called Sarin which causes the heart and lung muscles to spasm uncontrollably.

The good news is that there's already in antidote. The bad news is that Sarin is so potent that it can literally kill you in minutes. This means that doctors can rarely reach a victim in time. Chemical warfare is a tricky thing to fight but what if people suddenly became immune to these poisons?

Researchers at the University of Tennessee say that squids might have this capability, as it turns out they’re one in the only animals with enzymes known as bioscavengers. Although we're not really sure with the real purpose is for having them?

Bioscavengers can neutralize deadly nerve agent for they infect the body.

So, theoretically if scientists were able to take this squid’s enzymes and somehow place them in the human body—people could become immune to Sarin.

Okay, let's say they actually figure out a way to do that. The next problem would be getting these immunizations to Syria. It's not like American scientists can just walk into a war zone, right? What do you think guys about it? Share this with your friends; may be the ones who know about what's going on in Syria?

Crislene loves Biology. Spending her time much on reading ebooks in different fields of science. Shares facts and trivia while on Facebook. Get connected and like her page on Facebook/Kwentologist.

Thank you for reading Enzyme from Squids an Antidote Against Sarin a Chemical Walfare that Poisoning the Syria posted on the website Kwentology if you want to redistribute this article please include the link as the source. Have some kuwento to share? Contact us!