Factoid; Hello Kitty Is Not a Cat ~ Kwentology 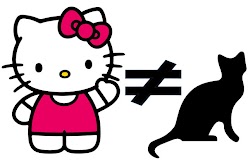 Factoid; Hello Kitty Is Not a Cat

The moon-faced kitten, seen almost everywhere from notebooks, paper dolls, fuzzy pillows, being a stuff toy, pencil case and pajama is in fact—human.

Hello Kitty isn't a cat, confirmed by the company behind the global icon of Japan, despite the insistence of Internet users worldwide. Though, the netizens reasoned: "But she has whiskers!"

"Hello Kitty is a cheerful young woman with golden heart," said by the brand owner Sanrio on their website.

The shocking revelation took when Hawaiian-based academic specializing in the epitome of kawaii ('cute' in Japanese) asked Sanrio for fact-check about captions for the exhibit celebrating the 40th anniversary of Hello Kitty.

According to Christine Yano, an anthropologist from the University of Hawaii, "The correction was very firmly". Sanrio's Hello Kitty is not a cat, and the actual identity of the worldwide Japanese icon as a cartoon character.

Despite having 'whiskers' and sharp ears, as well as her family members, Kitty has a pet and she taken care Charmmy Kitty—'real' cat.

Does this fact ruin you entire childhood? Leave us your comment below.

Thank you for reading Factoid; Hello Kitty Is Not a Cat posted on the website Kwentology if you want to redistribute this article please include the link as the source. Have some kuwento to share? Contact us!