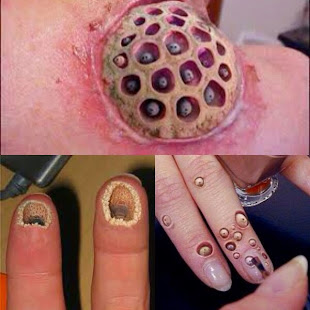 Trypophobia the Fear of Holes that Chills You Down to Spine

Kwentology
an academic , Facts , Health , Knowledge , Myths , What's in the News
Friday, September 5, 2014
No comments yet

Can I ask you a personal question? How do you feel about clusters of small holes? Does the look of baby Swiss cheese give you the heebie jeebies? What about the little air bubbles in a frying pancake, or the inside of a wasp nest, or the patterns of barnacles leaning on stones, or the lotus pod? Do those things make you throw up a little in your mouth?

Well then, friend, you may have trypophobia—the fear of clusters of small holes. Phobias are persistent, irrational fears of particular objects or situations, the causes of which are often unknown. In the bigger picture, being afraid of holes isn't that weird. People are afraid of all sorts of crazy stuff.


Trypophobia Not Yet Official Fear?

One etymologist has been collecting the names of phobias for nearly thirty years, and his list currently contains hundreds of odd fears, including fear of the moon, of beards, of pooping, puppets, numbers, vegetables, bicycles, beautiful women, the colors, and so many more—just name it.

However, trypophobia isn't on the list. It's not yet officially recognized as a legitimate phobia, despite the fact that an estimated 15% of people feel it to some degree.

The term itself popped up in the mid-2000s when internet users randomly began posting images of holey things and comparing their aversions to clusters of small holes.

Then, for close to a decade, trypophobia seemed to just be some weird viral internet thing.

Recently, psychologists Geoff Cole and Arnold Wilkins at the University of Essex in England decided to research its validity. After comparing a variety of benign images with pictures of all sorts of things that grossed people out. They found that the most offending images shared a common underlying mathematical structure. Namely, they featured lots of small, highly-contrasting details, like stripes, dots, or holes that were spaced apart in fairly close, regular patterns.

For example, the lotus pod, there's a high contrast between the dark holes, the light surface, and the holes are spaced evenly enough to highlight those details, while creating a repeating sequence that, apparently, makes some people want to puke.

Wilkins and Cole maintain these patterns are similar to those found in certain venomous animals like the blue-ringed octopus, various spiders and snakes. They speculate such images trigger something in the non-conscious brain that lights up a reflexive warning, saying "Hey! Stay away! That's dangerous!" before the conscious brain can step in and say, "Dude, that's just a bunch of holes."

If Wilkins and Cole are right, it would suggest that trypophobia is a lingering remnant of some earlier, useful evolutionary adaptation—namely, stay away from venomous things.


Is Trypophobia Used for Survival Adaptation?

Another theory is that holes in organic objects subconsciously trigger thoughts of contagious diseases or skin illnesses like rashes and boils, lesions, and pox—things that are dangerous to our health.

So, perhaps the fear of holes is a lingering evolved trait that once helped us avoid disease.

The most interesting though, is that trypophobia may also be a so-called emotional contagion. Essentially, meaning that it can transfer to more people as they become familiar with it.

For now, the true nature of trypophobia is a matter of speculation.

Thank you for reading Trypophobia the Fear of Holes that Chills You Down to Spine posted on the website Kwentology if you want to redistribute this article please include the link as the source. Have some kuwento to share? Contact us!