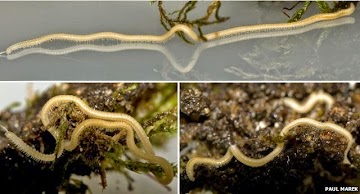 The Leggiest Animal In The World

In 1928, two scientists found a strange cream-colored millipede in California’s mossy woodlands. It seemed to have more legs than most millipedes, so they called it lllacme plenipes, which means “the peak of many feet” in Latin. Other scientists tried to find more specimens of l. plenipes, but they failed. Many people thought this particular type of millipede must have become extinct.

In 2005, an evolutionary biologist named Paul Marek conducted his own search for l. plenipes. He and his brother made several trips into the California woodlands where the millipede was last seen. He looked in dark, moist places where he knew millipedes like to hide. Finally, he found several l. plenipes. They were crawling around on the undersides of big sandstone boulders.

Marek took the creatures back to his lab, where he could study them under a microscope. He found that l. plenipes is quite small, even for a millipede. It’s 1.2 inches (3 cm) long. It has hairs on its back that produce a silky substance. And unlike other millipedes, its mouth can pierce plants and suck fluid from them.

Some of the specimens Marek collected had 750 legs. The previous record holder had been a species of millipede with 742 legs.

Today, l. plenipes is found only in special areas of Northern California. Its closest relatives is in South Africa. The fact that these two species believe that similar species may exist elsewhere in the world. They just may not have been discovered yet.

Thank you for reading The Leggiest Animal In The World posted on the website Kwentology if you want to redistribute this article please include the link as the source. Have some kuwento to share? Contact us!