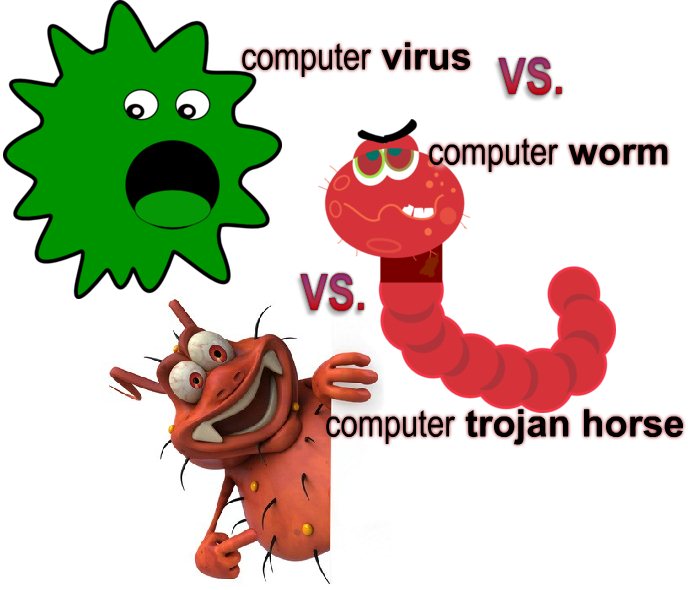 Viruses, worms and Trojan Horses are all malicious programs that can cause damage to your computer. However, there are differences among the three that you should be aware of.

A computer virus attaches itself to a program or file enabling it to spread from one computer to another, leaving infections as it travels. Like a human virus, a computer virus can range in severity. Some may cause only mildly annoying effects while others can damage your hardware, software or files.

Almost all viruses are attached to an executable file (.exe extension), which means the virus may exist on your computer. However, it actually cannot infect your computer unless you run or open the malicious program.

It is important to note that a virus cannot be spread without a human action, (such as running an infected program).

A worm is similar to a virus by design and is considered to be a sub-class of a virus. Worms spread from computer to computer, but unlike a virus, it has the capability to travel without any human action.

The biggest danger with a worm is its capability to replicate itself on your system. So, rather than your computer sending out a single worm, it could send out hundreds or thousands of copies of itself, creating a huge devastating effect.

Due to the copying nature of a worm and its capability to travel across networks the end result in most cases is that the worm consumes too much system memory (or network bandwidth), causing Web servers, network servers and individual computers to stop responding.

Some Trojans are designed to be more annoying (like changing your desktop, adding silly active desktop icons) or they can cause serious damage by deleting files and destroying information on your system.

Trojans are also known to create a backdoor on your computer that gives malicious users access to your system, possibly allowing confidential or personal information to be compromised. Unlike viruses and worms, Trojans do not reproduce by infecting other files nor do they self-replicate.

Thank you for reading A Short Post to Explain the Differences Between Malicious Programs That Can Damage Your Computer posted on the website Kwentology if you want to redistribute this article please include the link as the source. Have some kuwento to share? Contact us!