Is It Time to Bring Back Death Penalty in Philippines? ~ Kwentology 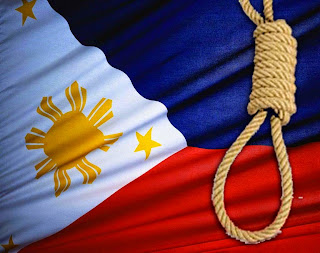 Is It Time to Bring Back Death Penalty in Philippines?

Recently, Quezon City Police killed a convicted "rapist-killer-robber". The death of Mark Soque, took inside fiscal office while he is attending cases filed against him. There is no foul play in the death of Soque because many people witnessed the incident. According to police, Soque allegedly abducted one of his police escort.

The two had a tug-of-war, causes the gun to blow twice that nearly hit his policewoman escort while the second bullet struck Soque's jaw. Even when he was killed, everyone says Soque's life isn't enough to pay for numerous crimes he owes.


Notorious Criminal of His Heinous Crimes

How many women had Soque's raped the time he robbed different establishments? The police have that record and without checking by ourselves we know there are countless.

We don't need to repeatedly discuss about rape because this is a traumatic part for every victims. We can only mention names that were killed and robbed by criminals.

If the punishment for death penalty law was not lifted, the sentence for Soque would really be death penalty! Robbery with rape cases and in the law of our Revised Penal Code, if it is not amended, the death penalty was destined for rapist like Soque.

For those of us who have daughters, wives, sister and female relatives or friends. Well, Soque's crimes, rape, robbery and murder is really unforgivable.

Although, as of now we don't have death penalty. We just can't stop litigating this kind of persons, they should be rot in the jail and there they have to wait for their deaths.


Philippines To Bring Back Death Penalty?

Similar crimes are occurring in these days. Thus, we should restore the death penalty here in the Philippines. After all, cases will undergo on stern court trial.

We only requesting that in such cases, proceedings should be accelerated until justice is reached. Also, hearing for these cases shouldn't be a "time-consuming" just like of what happened in the Vizconde massacre that took 20 years before the Supreme Court had their final decision.

In other countries, for example China, Indonesia, Singapore and Iraq within the 2-4 years cases from lower courts to the Supreme Court has been completed. Also, these nation have no flinch in the implementation of the death penalty.

In the countries mentioned, they use poison like lethal injection, hanging and firing squad to end life of that proven criminal offenders.

Once we bring back the death penalty, it should also be applied against plunderer and corrupt government officials. Beside getting people's justice, they will be saved from making 'small-time' community crimes such as stealing because their taxes will bring growth to our nation accordingly.

Michael Gierza leads the team of Kwentologist, where he shares informative write-ups.

Thank you for reading Is It Time to Bring Back Death Penalty in Philippines? posted on the website Kwentology if you want to redistribute this article please include the link as the source. Have some kuwento to share? Contact us!