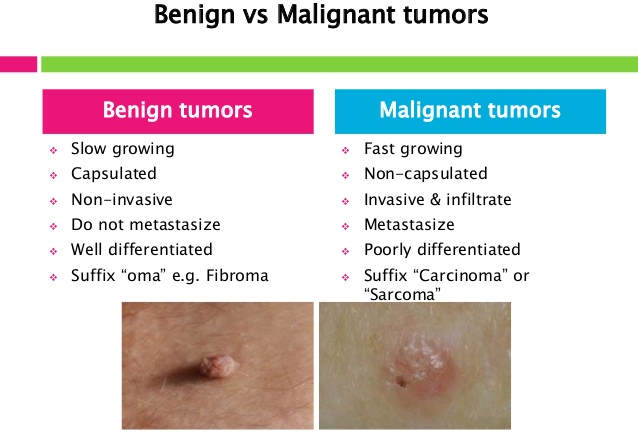 Most people when they hear the word tumor think CANCER but that’s not always the case.

There are a lot of different types of tumors, or neoplasms as they’re called by medical professionals.
There’s a lot of tumor terminology. Names of tumors most often come from where they grow.


Just the Benign Tumors are Safe

Examples of Malignant or Cancerous Tumors

Where Does Tumor Came From?

While they all go by different names, many tumors come from an overgrowth of tissues, maybe caused by a mistaken DNA. DNA might be damaged from radiation, tobacco smoke or other environmental agents, or maybe it’s just a stroke of bad luck.

Whatever causes it, this mutation makes the cell divide uncontrollably, basically making clones of themselves. As the cells pile up, a tumor grows. If it grows big enough it can harm nearby organs and tissues or sometimes a part of the tumor can break off and take up residence in other parts of the body, which is when cancer metastasizes.

There’s another idea, that stem cells trigger tumors. These wonky stem cells drive tumor growth and just like normal stem cells can give rise to differentiated cells. These stem cells are especially good at resisting treatment like chemotherapy.


Treatment for Cancerous Tumors and Side Effects

Chemotherapy might wipe out those differentiated cells, but leave the cancer stem cells behind, so they come back stronger and in greater numbers.

Chemotherapy is a brutal process, the first chemotherapy drugs were a derivative of mustard gas. It does have the nifty ability to stop cell growth. Which is handy when dealing with runaway cell growth. But it can also harm other type of cells that grow a lot, like hair follicles.

While modern drugs work in other ways, they’re still pretty nasty. With the usual side effects of hair loss, fatigue, nausea, and a knocking out of the immune system.

Another way we attack tumor cells is through radiation, where radiation beams are aimed at a tumor and stop its growth by damaging DNA.

While the immediate side effects are minimal, it might feel like a sunburn. Other long-term effects might be more damaging. Radiation isn’t 100% effective. Some tumor cells could get left behind, which is a problem with surgery too.

Some of these treatments are nasty, painful and seem to leave the job unfinished. So why haven’t we come up with anything better? Well there’ve been some cool new ideas put forward recently.

Researchers from Duke University are looking to treat tumors with polio. Polio, a horrible virus, used to run rampant and kill thousands of people a year and paralyze thousands more until the introduction of a vaccine in 1955.

You’d think the world would never want to see the disease again. Yet over the past few decades scientists have re-engineered the virus which seems to knock out a brain tumor’s defenses, allowing the patient’s immune system to finish the job.

Another new idea might make surgery a little easier. Some researchers from the Fred Hutchinson Cancer Center in Seattle propose injecting people with scorpion venom. The venom is injected into the patient's blood stream, crosses the blood-brain barrier, and makes its way into the brain tumor.

Scorpion venom has to find it’s way to the brain of its prey to paralyze it. Turns out that same compound binds really well the surface of brain tumor cells.

The other part of Tumor Paint lights up under fluorescent light. This could be huge. That way brain surgeons can see the tumor literally glowing and see where the tumor stops and the healthy brain tissue starts.

Thank you for reading Science of Tumor - Types, Causes, and Treatments posted on the website Kwentology if you want to redistribute this article please include the link as the source. Have some kuwento to share? Contact us!