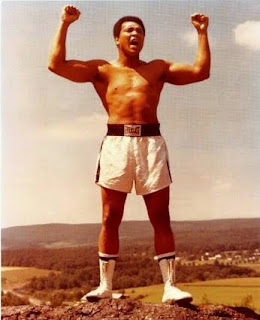 Considered as 'The Greatest Boxer of All Time', Muhammad Ali picked the 8-division boxing champion Manny Pacquiao wins over US undefeated champion Floyd Mayweather Jr. on their upcoming event this May 3 at the MGM Grand.

Even the son of Ali, Rasheda Ali announced that they believe Manny Pacquiao will win the game. It is known to Ali how great boxer Manny Pacquiao is, but what he does outside the ring as helping the poor makes Pacman awesome. As close to his father, Rasheda said he respects Floyd Jr.


"My dad is Team Pacquiao all the way," said by Rasheda at TMZ Sports.

Pacquiao and Ali became friends when they met on Ali's celebration of his 70th birthday last 2012.

Meanwhile, Rasheda asked to refrain comparing both fighters because they have their own uniqueness.

Rasheda said that Ali can't go to witness the fight live at the MGM but assured to watch it at home through pay-per-view.

Thank you for reading Why Muhammad Ali Chooses Manny Pacquiao? posted on the website Kwentology if you want to redistribute this article please include the link as the source. Have some kuwento to share? Contact us!