The First Warm-Blooded Fish Ever Discovered in the History ~ Kwentology 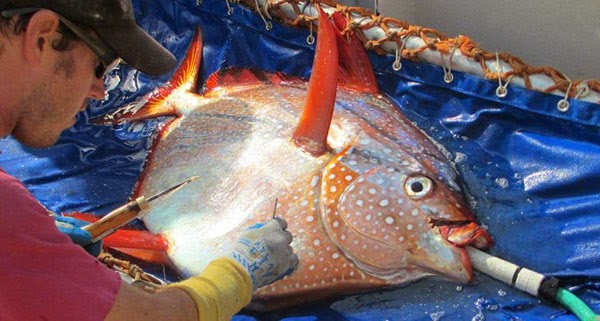 The First Warm-Blooded Fish Ever Discovered in the History

Kwentology
Animals , Facts , kids resources , Knowledge , Science , What's in the News
Wednesday, May 20, 2015
No comments yet

Based on scientific studies, fishes are concentrated cold-blooded, but the discovery of Opah fish, made that fact at stake. Scientist found out that the Opah fish is a warm-blooded animal like us humans and other mammals.

In this discovery, scientists recorded the fish that is almost as big as car and it's the first warm-blooded fish in the world.

Nicholas Wegner, study leader at biologist in Southwest Fisheries Science Center of National Oceanic and Atmospheric Administration (NOAA) Fisheries in La Jolla, California said that the majority of fish are exotherms, which means they need heat from their environment to survive.

As an endotherm, the Opah or Lampris guttatus is maintaining its body temperature by heating up the surrounding water they plunged in, with this ability they can even reached diving the depths of 1,300 feet (396 meters).

Commonly called as moonfish, with small red fins and giant oval-shaped body reaching six feet (1.8 meters) long. The fins warm up the body of this rare fish, in addition to the heat of the water from sunlight.

It appears that heat produces in the body of Opah is the energy generated from the movement of its fins while swimming.

Thank you for reading The First Warm-Blooded Fish Ever Discovered in the History posted on the website Kwentology if you want to redistribute this article please include the link as the source. Have some kuwento to share? Contact us!