Video: Every Pilot Should Know. Remove Cat Before Flight! ~ Kwentology 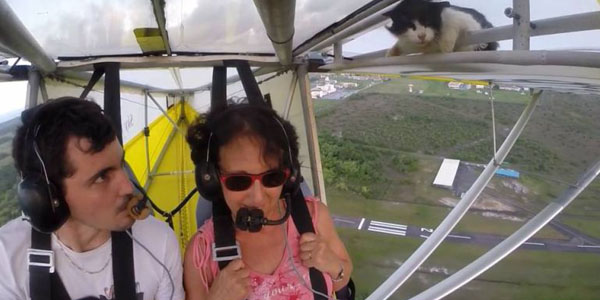 Video: Every Pilot Should Know. Remove Cat Before Flight!

Up, up, and fly up to the sky! Caught on camera... A cat found herself riding on a plane, and gripped on its wing so tight in Kourou, French Guiana.

The viral video posted on YouTube on June 21, that had gathered about 15 million views as of now was the video of a pilot Romain Jantot, his female partner, and another unwanted passenger — a cat. No one noticed that kitty cute cat but right after they took off it crawled closer to them, and they were surprised to discover that they have chance passenger on their flight.

Jantot immediately landed the plane and put the cat into safety.
The viral video description says, “A standard flight until… I still don’t know if it got in after the pre-flight check or if I missed it.”

The cat is doing well, and they're looking for a name, if anyone has a funny idea...Keep in mind that this kitty is a 'she'.

Sometimes, the viral video like this is a fake. But Arizona pilot Stephen Bass said to The Huffington Post, that this one is real. There’s fabric on the top and the bottom of the wing and space in between,” a statement from Bass. You see the cat crawling out from the center of the wing, where it was protected.

Bass is a president of a nonprofit Copperstate Fly-In and has 500 hours of flying experience that includes light sport aircraft, the same kind of aircraft seen on the video.

Thank you for reading Video: Every Pilot Should Know. Remove Cat Before Flight! posted on the website Kwentology if you want to redistribute this article please include the link as the source. Have some kuwento to share? Contact us!