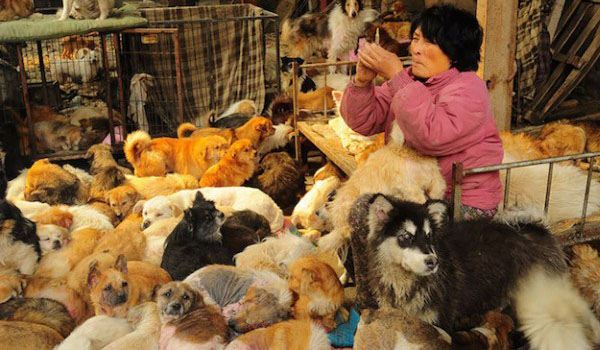 Amazing Story: A Woman Who Saves Hundreds of Dogs from Annual Dog Meat Festival in China

Kwentology
Facts , International News , What's in the News
Saturday, June 27, 2015
No comments yet

The lives of almost 100 dogs were rescued by a retired teacher and animal advocate this last June 20 after paying $1,100 to save these animals on that such annual dog meat festival in the southern city of Yulin, China.

Meet Yang Xiaoyun, a 65-year old woman, she traveled 1,500 miles from her home in the city of Tianjin to rescue these helpless dogs away from being slaughtered, according to the report of Agence France-Presse. Yang started saving animals since 1995, when she saved an abandoned cat from the river. In 1999, she built the dog and cat sanctuary known as "Common Home for All".

She has taken hundreds of animals, sold her home and rent a place for animals, according to the 2013 video related to her achievements. She prepare food for the animals she considered as part of her family, according to the Times of India reports. At the present, she already had 1500 dogs and 200 cats. The 'selfless act' of Yang in Yulin was witnessed by the international observers and activists during the dog meat festival in the city.

Eating dog meat has historical precedent in China, said by Peter Li, China policy specialist for Humane Society International and associate professor at the University of Houston-Downtown, but the Yulin festival only began this last 2009.

An estimated 10,000 dogs were slaughtered each year for Yulin festival, along with the summer solstice.

Thank you for reading Amazing Story: A Woman Who Saves Hundreds of Dogs from Annual Dog Meat Festival in China posted on the website Kwentology if you want to redistribute this article please include the link as the source. Have some kuwento to share? Contact us!