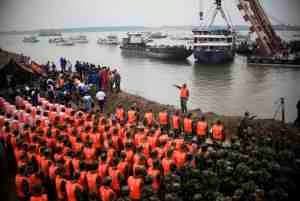 A solemn ceremony was carried out in China related to the cruise ship sank in the Yangtze River.

With the number hit at almost 406 confirmed deaths is considered as one of the worst shipping disasters happened in China for almost seven decades.

Early this morning prayers from the various salvage and rescue personnel were offered while the ships horn continuously as a tribute to those killed by the accident.

China's transport minister Yang Chuantang also attended the ceremony. Chinese authorities already announced the zero possibility to find more survivors. They are now starting to lift the ship Eastern Star which most of its passengers were elderly people.

In the total of 456 persons boarded the ship before it sank due to the bad weather, only 14 were luckily rescued.

Thank you for reading Solemn Tribute for Ship Tragedy in China posted on the website Kwentology if you want to redistribute this article please include the link as the source. Have some kuwento to share? Contact us!