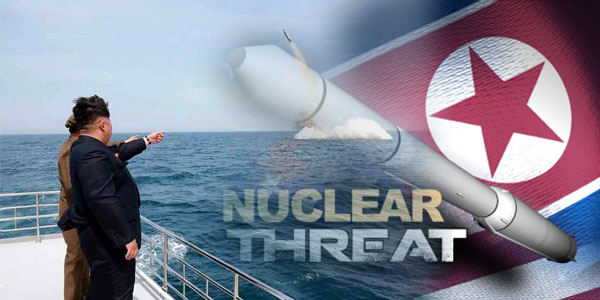 Kwentology
International News , What's in the News
Thursday, July 2, 2015
No comments yet

Based on the latest report on North Korea, a communist nation was able to minimize the size of their nuclear weapons. At the same time, UN Secretary General Ban Ki-moon refused to visit the country.

Whether the vaunted advance arms of NOKOR is true, it means that they can put nuclear warheads in every ballistic weapon they have. For NoKor National Defense Commission (NDC) in Pyongyang, it was long enough that they miniaturized and diversified the launching of their nuclear strikes. They reached the stage of the highest accuracy rate can guarantee not only for the short and medium-range missiles, but also for the long-range one.

The statement was followed by the launch of ballistic missile from the submarine, which can go through and pass over the Korean peninsula.

A picture of the Supreme Leader NOKOR, Kim Jong-Un, was captured smiling and pointing to a missile that emerged from the water, however, there are some analysts who believe that images were only manipulated.

Mr. Kim canceled the UN chief visitation after accusation of inducing to a warming of tension in the region.

Thank you for reading North Korea On Their Nuclear Weapons Advancement posted on the website Kwentology if you want to redistribute this article please include the link as the source. Have some kuwento to share? Contact us!