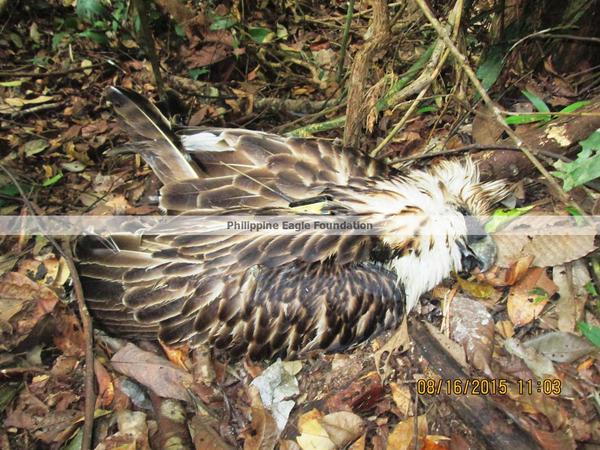 Ignored by the People's Perspective #Pamana and the Endangered Philippine Eagles

Who is guilty for killing an endangered Philippine eagle? She was rescued, loved, and released back to her rightful habitat - a Philippine eagle named "Pamana" among of its specie is considered to be endangered.

But unfortunately, after two months of her released on June 12, the "Independence Day", the eagle was found dead by the biologists in Mt. Hamiguitan Range in Davao Oriental on August 16 with a gunshot wound in the chest, according to the necropsy report of the Philippine Eagle Center in Davao City. Consequently, Sen. Miriam Defensor-Santiago would like to investigate the death of Pamana and she will file a resolution in the Senate next week to ask for the investigation of an incident.

She also wants an explanation of how protection is provided for animals that are already in the breach of extinction, due to the fact that the mountain range is a protected area. She asked what kind of security does the Mt. Hamiguitan Range Wildlife Sanctuary serves as the endangered eagle killed by the unknown shooter. Then, maybe there are flaws in the mountain range security despite it is a protected area.

Pamana is a symbol of hope for its specie to survive and multiply. This is the sole purpose for which it was released back in the forest. Pamana is a type of eagle that is endemic in the Philippines, meaning, it can only be found in our country.


We can't let this happen again. Together we can protect our national bird #PaalamPamana #SavePhilEagle.

Killing Pamana is also ignoring the extraordinary heritage of our country.

Thank you for reading Ignored by the People's Perspective #Pamana and the Endangered Philippine Eagles posted on the website Kwentology if you want to redistribute this article please include the link as the source. Have some kuwento to share? Contact us!