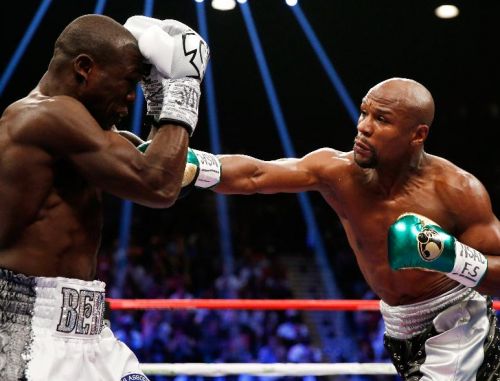 Floyd Mayweather Jr. remains undefeated, in his 49th fight by beating WBA interim welterweight champion Andre Berto in their recent boxing match at the MGM Grand in Las Vegas, Nevada. From round 1 to round 12, the whole fight was controlled by Mayweather with his defense, jabs and speed combination.

In round 10, Mayweather complained his left hand injury, but he still managed to land some jabs on Berto.

Obviously, Berto was visibly frustrated to catch and break the intense defense of Floyd, as Mayweather is famous with his jabs-then-run tactics. After 12 rounds, Mayweather won, via unanimous decision in score of 117-111, 118-110, 120-108.


Is This Really END for Mayweather?

Floyd initially said fighting Berto would be his last fight before retirement from the boxing.

Although, many boxing fans doubt that this is Mayweather's last ring match, the Floyd camp restated that this is the final and no other fights to follow.

This situation was exemplified back in 2007 when he announced his retirement after beating Oscar De La Hoya but few years after he made his comeback to face Juan Manuel Marquez in 2009 and Victor Ortiz in 2011.

Espinosa added, if someone would asked him personally about Mayweather, he will not allow such boxer to make an early retirement due to the fact that boxing with Mayweather is a great factor on entertainment business.

Pacquiao also challenged Mayweather to have their rematch next year.

Thank you for reading Remains Undefeated in his Retirement; Floyd Mayweather Final Battle posted on the website Kwentology if you want to redistribute this article please include the link as the source. Have some kuwento to share? Contact us!