Gilas Pilipinas Losses for the Second Time Against Iran ~ Kwentology 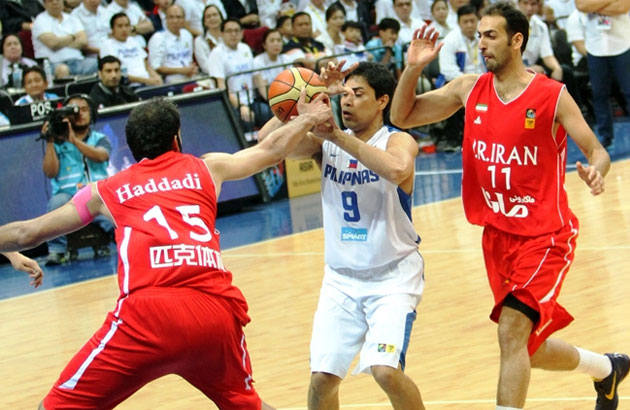 Gilas Pilipinas Losses for the Second Time Against Iran

Team Gilas Pilipinas again is in tears, after the national team defeated by Iran, 74-65, in the 37th William Jones Cup at Xinzhuang Gymnasium in New Taipei City, Taiwan.

The Filipino team is led by Asi Taulava with his 12 points and 8 rebounds. Off the bench, with surprise apiece contribution of 10 points from Jayson Castro and JC Intal.

Still, Gilas was dominated by the star player of Iran Hamed Haddadi, who led the overall scoring with 22 points and 15 boards.

The second loss of Gilas Pilipinas (3-2), which the team hoped beating Iran (5-1) will give them a chance for the Jones Cup title, where the team Gilas was champion last 2012.

But, Iran's Haddadi thwarted any remaining expectation for the Philippine team. Moreover, within the extent of the two years the Philippines failed to defeat Iran.

A great defense was overthrow by Iran in the early of the game. However, Sonny Thoss and Calvin Abueva have trouble with their two individual fouls in the first quarter. The heat of the game did not ease, before the end of the first period as Haddadi and Moala Tautuaa have confrontation.

Haddadi's complaining about the alleged vigorous elbow hunching of Ranidel de Ocampo to where Tautuaa confronted the Iranian.

Iran attempted to advance in the third quarter, but Taulava of Gilas was able to follow, and get closer to the basket. But, Haddadi is far assertive for Taulava and his fellow team mates.

From 54-43, Iran is in the lead. Abueva was able to get through, where he scored six straight in the third and fourth quarters resulting the scoreboard to 56-53 at the start of the final quarter.

Hamed Afagh of Iran drive the score to 65-56, in the last 4 minutes of the game.

Intal was able to chase down the opponent's score to four, 65-61, but a three-point shot of Mohammad Jamshidi and a dunk made by Haddadi favors Iran, 70-61, and from there Philippines was helpless to recover.

Gilas next opponent is New Zealand.

Thank you for reading Gilas Pilipinas Losses for the Second Time Against Iran posted on the website Kwentology if you want to redistribute this article please include the link as the source. Have some kuwento to share? Contact us!