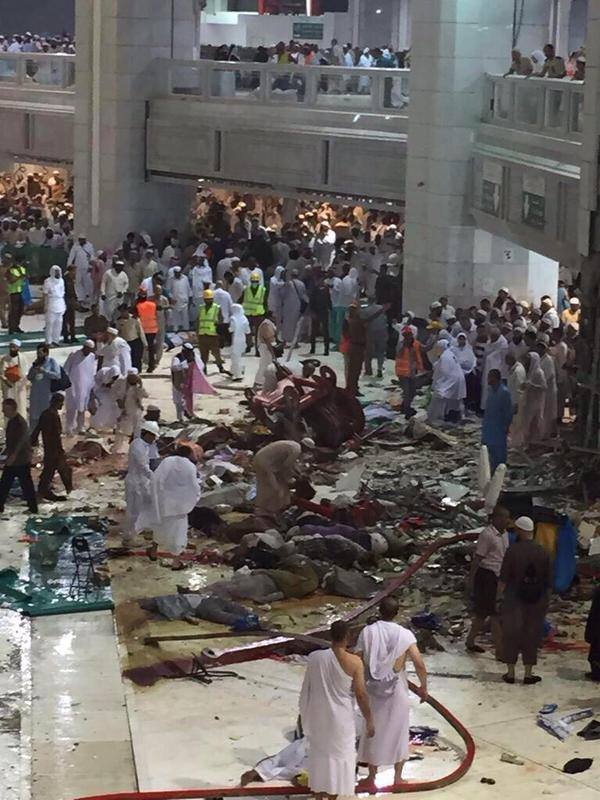 MECCA, Saudi Arabia (AFP) - At least 107 people were killed when the giant crane collapsed at the Grand Mosque in Mecca, and hundreds of others wounded, according to Saudi authorities, a few days before the annual hajj pilgrimage.

Based on the statement of the civil defense agency on Twitter, they sent emergency teams on the scene of the accident after the "crane fell and the Grand Mosque". It happened one hour later after Twitter announced that Mecca experiencing medium to heavy rains, and sharp lightning shown on the attached pictures.
According to Ahmed bin Mohammed al-Mansoori, a spokesman for the two mosques, a crane collapsed at 5:10 pm (1410 GMT) "as a result of strong winds and heavy rains".


Abdel Aziz Naqoor, working at the mosque, was one who witnessed how crane destroyed due to heavy rain. He also stated that if it weren’t for Al-Tawaf bridge the injuries and deaths would have been worse. Shared pictures on Twitter shows bloodied bodies lying in the courtyard.

YouTube video also filmed crowd of people trying to leave the mosque after the accident.

The incident occurred in the middle of the congregation of thousands of Muslims from around the world for the annual hajj pilgrimage, which is expected to start this September 21.

Usually, the Grand Mosque is crowded by the people every Fridays, this is due to the weekly day of prayer for Muslims.

Also, last Sunday a small fire caught Makkah, however no casualties in the said incident.

Thank you for reading Watch! Video Footage of Makkah Tragedy posted on the website Kwentology if you want to redistribute this article please include the link as the source. Have some kuwento to share? Contact us!