Abigail Binay to Run as Mayor for Makati City ~ Kwentology 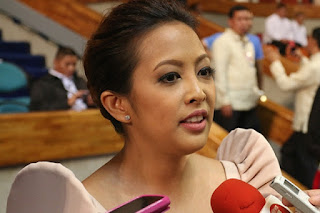 Abigail Binay to Run as Mayor for Makati City

Makati Rep. Abigail Binay clarified she will only run for the mayor of Makati City if her brother, former Makati Mayor Junjun Binay eventually be disqualified to run again as mayor of the city.

Congresswoman stressed that the dismissal order for her brother from the Office of the Ombudsman is illegal. So, Junjun Binay will still submit his certificate of candidacy and run for the mayor again.

Former Mayor Junjun Binay appealed against the order of the Ombudsman, seeking options from the Court of Appeals or the Supreme Court.

The political affairs spokesperson of Vice President Binay, Atty. Rico Quicho initially called it as "selective justice", the order of the Office of the Ombudsman against Junjun. The lawyer accused the Ombudsman of being manipulated and "remote control" in comparison.

She said that the mayor haven't yet answered COA's findings, Ombudsman Conchita-Carpio Morales immediately decide to remove Mayor Binay away from his position as current mayor of Makati City.

Thank you for reading Abigail Binay to Run as Mayor for Makati City posted on the website Kwentology if you want to redistribute this article please include the link as the source. Have some kuwento to share? Contact us!