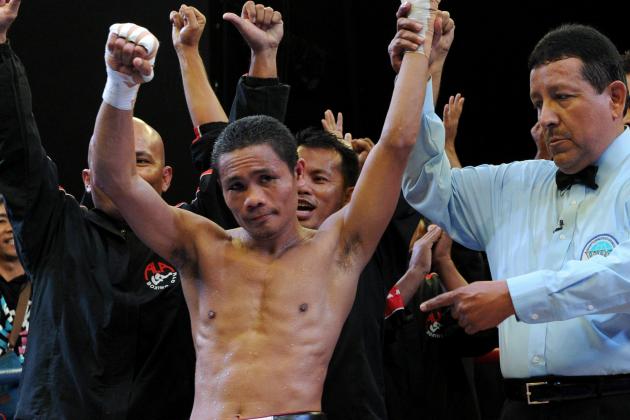 Five Pinoy boxers won their battles on "Pinoy Pride 33: Philippines vs. the World" held at Stubhub Center in Carson, California. In the main event WBO junior flyweight champion Donnie Nietes (37-1-4, 21 KOs) successfully defended his title. After winning by unanimous decision with scores of 119-109, 119-109, 120-108 against Juan Alejo, (21-4, 13 KOs) of Mexico. Nietes also continuously beat his record as the longest active titleholder, he holding his title from 2007 and have not been defeated since 2004.

Meanwhile, in the very first round, Mark Magsayo, (12-0, 10 KOs) marked his victory against previously unbeaten Yardley Suarez (13-1, 8 KOs) and retain his IBF Youth featherweight title. In the opening round, Magsayo immediately release an offense that struck a powerful right and sharp left hook that blew Suarez. Suarez insisted to resume the fight, but he can't bear the brunt he received from a 20-year-old Filipino boxer.

Junior welterweight Jason Pagara (37-2, 23 KOs) also won his fight against Nicaragua's Santos Benavides (25-8-2, 19 KOs). Jason knocked Benavides for three times, a reason to stop the fight at the remaining 2:53 of round two.

Thank you for reading Five Filipino-Pride Boxers Won in California posted on the website Kwentology if you want to redistribute this article please include the link as the source. Have some kuwento to share? Contact us!