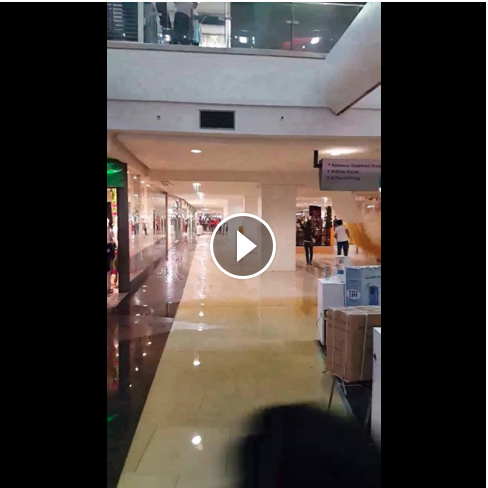 Robinsons Place Manila is a shopping mall located behind the Philippine General Hospital and the campus of the University of the Philippines Manila (UP-Manila). Aside from its regular shoppers, this is the cooling place to shelter students of different schools upon warming weather. Notably, OFWs who processing their papers might have been their couple of times for are many employment agencies operate around Pedro Gil, Ermita, and Malate.

Aside of being the second and by-far, the largest Robinsons Mall ever built by John Gokongwei. This has been in business for about 2 decades. It began its operation in 1995 and was opened in 1997 for the shoppers. The mall features anchors like Robinsons Supermarket, Robinsons Department Store.

Not quite old enough, some of it's minor section may crumple at any time soon. Just like what happened to this video which uploaded in Facebook shows how Robinsons Place Manila ceiling collapsed.
Droplets of water were already observed by many then was initially reported for the maintenance, it's hefty however and soon fell down.

Based on the Facebook post, Kenneth Anthony Trinidad managed to capture the video just in time the ceiling can't sustain the weights of stored flood water brought by the recent super typhon Lando. Bagyong Lando carried too much volume of rain water that affected the second and third floor parking area which later hoarded down to the ceiling.

Security personnel blocked the area so none of any people hurt in that incident.

Thank you for reading Watch! Video of Robinsons Place Manila Ceiling Collapsed posted on the website Kwentology if you want to redistribute this article please include the link as the source. Have some kuwento to share? Contact us!