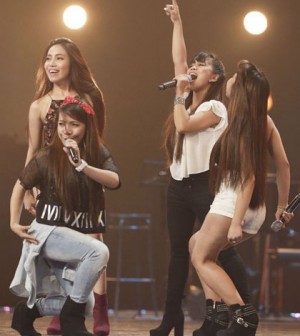 The Filipina group of quartet "4th Power" received a standing ovation from the four juries during their live performance at X-Factor UK.

It's for their rendition of the song "Work It Out" by RnB singer Beyonce.

It is said that before the Fourth Power's performance that night. Celina, the sister of Almira, Mylene and Irene fainted at the backstage.

This week's theme songs were all from the films "Licence to Kill", "Men In Black", "Romeo and Juliet", "Austin Powers" and "The Bodyguard".

According to their judge and mentor Cheryl Fernandez-Versini, the sisters have thier choice not to perform for that night. They can use the rehearsal recorded tapes, but still the Fourth Power sisters chose to take the risk to go on with their live performance.


“I’m so proud of all of you for getting up in those circumstances. You had the chance to use the rehearsal tapes but you said no. We (singers) suffer things like this. There’s things you have to just do and you guys did that tonight without the professional experience.” as Cheryl Fernandez-Versini speak.

After the live show of Cercado sisters, Celina felt dizzy again and immediately a chair was placed on stage for her.

But for the X-Factor judges, the group shown an incredible performance that night.


As for judge Simon Cowell, "Under the circumstances that was the most incredible performances we have ever seen. I was there as this was all happening backstage so I know what you've been through. I hope you're OK, sweetheart."

For Rita Ora, "Celina you really were a hero tonight, well done."

Currently there are only nine finalists left. Again, everyone is expecting for a double elimination round next face-off.

Thank you for reading Member of Fourth Power Sisters on The X Factor UK 2015 Collapses posted on the website Kwentology if you want to redistribute this article please include the link as the source. Have some kuwento to share? Contact us!