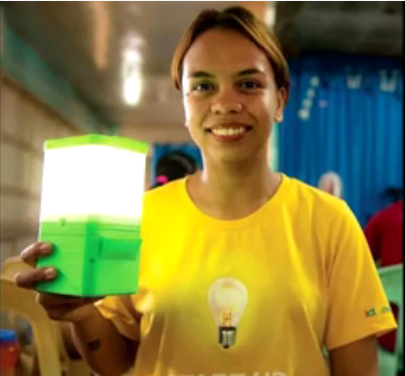 During the APEC Summit in Manila this 2015, a Filipina and two other guys were being acknowledged for their most valuable invention. Invention that has a huge advantage as countries all over the world are looking for alternatives fending off the climate change. Most delegates who come for APEC summit were also scheduled to attend the "COP21," a climate change forum in France.

Filipinos invented a Lamp that runs in Salt and Water

Three Filipinos created and invented an amazing lamp where it can have 8 hours of light just by using a glass of water and two tablespoon of salt. It also run in sea water, than means people live near in the ocean can use the lamp immediately.This lamp is called Salt Light, there's no need to worry about if there is an accident because this has no flammable components that could start a fire. Making it a safer alternative to a kerosene-fed lamp that were being used by a lot of Filipino that don't have electricity. This lamp is environment friendly because it does not emit harmful gases.If you have low on battery phone, this invention has an emergency USB port where you can charge your mobile phone through it's port.The inventors of this Lamp are siblings Aisa Mijeno, a computer engineer and her brother Raplh Mijeno and the other is Oscar Bryan Magtibay.They invented this lamp to help the less fortunate people who don't have electricity in their household.Please do share this amazing video. #Science #Mabuhay #Philippines #Pilipinas #AstigPinoy #inventions #kwentologist

Posted by Kwentologist on Thursday, 26 November 2015

These three Filipinos invented a lamp that could last up to 8 hours. The most amazing fact about this lamp, you only need a glass of water and two tablespoon of salt. And boom...! The lights turned on!

This only means that you can have a light of heaven for the entire night with just a single glass of sea water. Imagine if you are just right next to the ocean, right? Living near the shoreline gives you an immediate access to this lamp, lights up for FREE!

This lamp is called Salt Light, there's no need to worry if you accidentally dropped it. This has no flammable components that could start a fire. Making it much safer alternative compare with the kerosene-fed lamp which are being used by a lot of people that don't have access to the electricity yet. This lamp is environment-friendly , it does not emit harmful gases that could hurt the atmosphere.

If your phone battery gets empty, this invention has an emergency USB port where you can charge your mobile devices.

The inventors of this Salt Light project are;
The lamp was invented to help the less fortunate people who don't have electricity in their household. How convenient is it to have a source to light a lamp for free? Without risking the environment this invention should rather be a necessity.

Thank you for reading Filipina Invented a Lamp that Lights Up with Just Salt and Water posted on the website Kwentology if you want to redistribute this article please include the link as the source. Have some kuwento to share? Contact us!