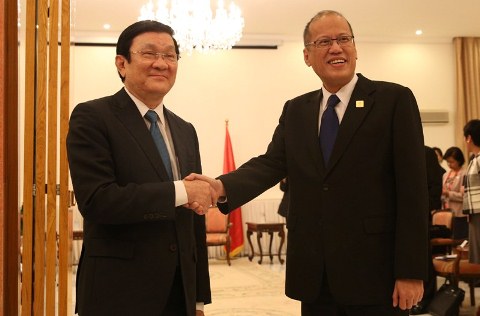 President Aquino confirmed that on their bilateral meeting with Vietnam's Pres. Truong Tan Sang, they discussed one of the most sensitive issue, the territorial dispute in the West Philippine Sea.

President Aquino disclosed that in a joint statement, they clearly discussed the ruling of the Arbitral Tribunal on relation to the cases filed concerning disputes on the west Philippines sea and waters covering east of Vietnam.

According to the President, he emphasized it with President Truong that this is one important step towards the goal of peaceful and fair resolution. Knowing the rights and obligations under the United Nations Convention on the Law of the Sea (UNCLOS).

The Philippines is preparing its merits on the filed case.

Aside of China, Vietnam is also one of the claimants in the West Philippine Sea territory, both Philippines and Vietnam have correlated to a peaceful resolution about the said territorial dispute.

Thank you for reading Vietnam President Truong Tan Sang Talks About West Philippine Sea Dispute on his APEC One-on-One Meeting with President Aquino posted on the website Kwentology if you want to redistribute this article please include the link as the source. Have some kuwento to share? Contact us!