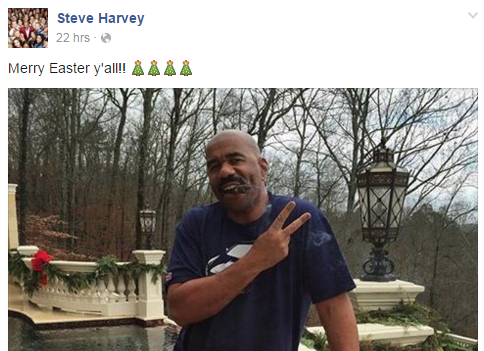 The host who messed up the proclamation of the Miss Universe 2015 pageant grand winner, Steve Harvey, successfully redeemed hearts of the netizens this Christmas.

Steve Harvey greeted his fans on Facebook, making fun of himself posting a greeting “Merry Easter y'all!!!” together with four emojis of Christmas trees, instead of “Merry Christmas”.

This December, Harvey mistakenly announced Miss Colombia Ariadna Gutierrez as Miss Universe 2015. However, he then apologized onstage few minutes after, declaring Miss Philippines Pia Wurtzbach as the real winner of the 2015 Miss Universe.

His gaffe was so surprising that he even became an Internet sensation subjected to humorous jokes and memes. Harvey is supported by all showbiz personalities around the world, mistakes somehow inevitable the good thing is Harvey managed to fixed the issue with honesty.

Thank you for reading Steve Harvey Mistakenly Greets Christmas posted on the website Kwentology if you want to redistribute this article please include the link as the source. Have some kuwento to share? Contact us!