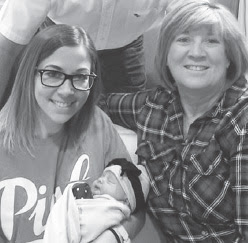 In North Texas, a woman who is already passed her menopausal stage give birth to a healthy baby girl. This happened after the woman agreed to be the vessel of her own granddaughter in the process of surrogation.

Doctors at The Medical Center of Plano releases statement on Thursday, there were four fertilized embryo left for the couple, this led to Tracey Thompson to voluntarily offered herself to be a surrogate even she has her menopause left 7 years ago.

Tracey Thompson give birth to a 6-pound 11-ounce girl after serving as surrogate for her 28-year-old daughter. Both grandmother and the child are in their best condition. The couple named the baby girl Kelcey, it is the combination of the grandmother's and the mother's name. The doctors implanted embryos in Thompson's womb last April and the result was amazing!

Thank you for reading A 54-Year Old Woman Give Birth to a Healthy Baby Girl posted on the website Kwentology if you want to redistribute this article please include the link as the source. Have some kuwento to share? Contact us!