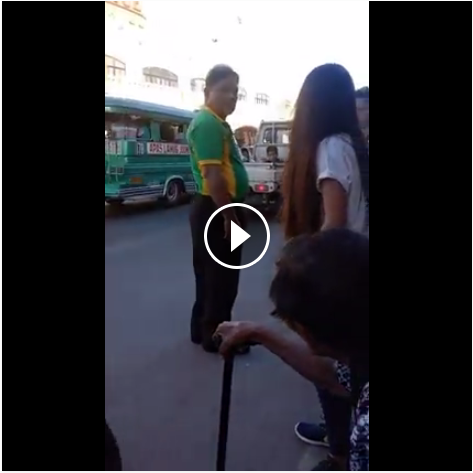 The video filmed a teenage girl and enforcer having aggressive discussion on street gone viral.

The video later revealed a heartless traffic enforcer who was first approached by this young woman asking for help. Traffic enforcer refused to assist the girl who is also trying her best helping an elderly woman.
Upon watching the video, for my own personal opinion... I guess the old woman has a stroke. The reason why she can't find a cab to ride on. And she has staff for bracing herself.

Before the incident happened, the girl saw the old woman who is seem totally exhausted. The girl learned that the woman is on her way to Mabolo but since she is physically disabled she is having a hard time looking for a taxi to commute with. Now, as she offered to look for the cab. That is when she asked the enforcer to backing her up allowing the elderly to be safely get inside the taxi.

Unfortunately, the guy keeps on ignoring her even if she already called his attention for 10 times. Plus, the enforcer burst out making the situation worst.

As they said, this world is full of good people. If you can't find any then be one. This applies to this girl who has an eagerness to help a total strangers. However, for the enforcer it's up to you guys to make your own sentiment.

Thank you for reading Watch!Traffic Enforcer Refused to Help Teenage Girl Gone Viral posted on the website Kwentology if you want to redistribute this article please include the link as the source. Have some kuwento to share? Contact us!