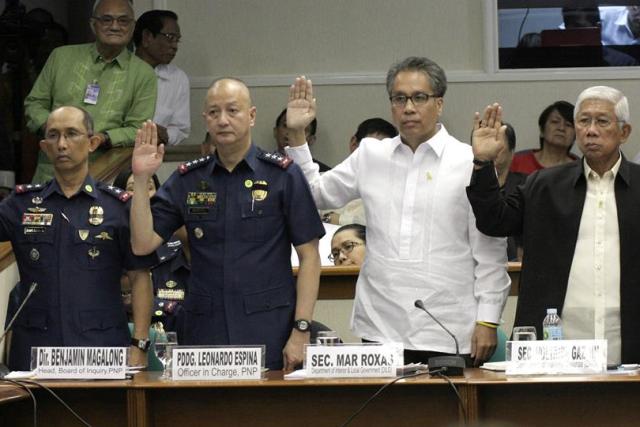 Senate is about to resume the investigation on the Mamasapano encounter were almost 67 people suffered from the brutal death, involving the famous SAF44 is now turning 1 year after that fateful day. The current administration however afraid for the possible negativity that may affect its running slate.

One of the Liberal Party member stated that bringing back the probe for Mamasapano incident is a clear tactic to ruin the administration under President Benigno Aquino III. The worst case for Manuel Roxas II, a chosen candidate to be Aquino's successor will surely be degraded. Truly, Mar Roxas is one of the people responsible for the bloody encounter occurred in Mamasapano, Maguindanao last January 25, 2015. Mar Roxas that time is the head of the Department of Interior and Local Government (DILG), this also allowed him to have a direct command on the national police. The failure encounter in the Mamasapano clash terribly weakens Mar Roxas status.

Iloilo City Representative Jerry Treñas, Liberal Party coordinator dubbed the Senate movement as the highest form of disrespect and dishonor to those elite cops who were killed during the mission to capture terrorists which believe to be on Muslim rebels custody.

The reopening for the investigation was requested by the Senate Minority Leader Juan Ponce Enrile. Senator Grace Poe, a rival presidential aspirant of Mar Roxas for this National election 2016 will led the investigation.

The deaths of SAF44 exposed the flaws of the BBL administration is frustratingly trying to propose.

Thank you for reading Why Resuming the Investigation of the Mamasapano Encounter Bad for Mar Roxas posted on the website Kwentology if you want to redistribute this article please include the link as the source. Have some kuwento to share? Contact us!