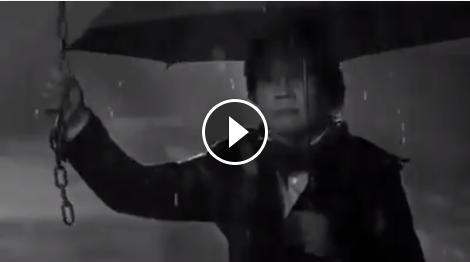 A black and white short film represents drug syndicate activities inside a dive bar promotes Leila de Lima's feat. In the video, several people were involved in criminal acts such as using illegal drugs, boozing with alcohol while smoking, eating, and prostitution. The video also displays how these people plying their underground deal as suitcase full of money is seem to be exchanged.
It's Leila de Lima versus the bad guys!

Leila de Lima campaign video shows her political platform of "justice without fear or favor." This may refer to a person or gang that apparently under the protection of the powerful people.

After the slide showcases these bad guys inside the bar. Three other men made their exit, unfortunate for them someone is waiting at the edge. Shady yet rainy night revealed Leila de Lima is walking towards them. And without a single word...

Leila de Lima pulled down the chain that drops an iron cage trapping these 3 criminals.

As a former Justice Secretary, Leila de Lima exposed criminal acts of countless people some includes influential politician like the 3 senators who are involved in the pork barrel scam. The three criminals caught by de Lima in that video may depict these 3 senators.

These are three senators who have connection with Pork Barrel scandal;
Enrile was recently granted a temporary released while the other two senators are currently detained at the Camp Crame Custodial Center.

De Lima is running for a senatorial seat under the President Aquino's LP “Daang Matuwid” coalition. She also have opposition to the presidential aspirant Davao City Mayor Rodrigo Duterte and accused him for extra-judicial killings over these criminality.

Duterte and De Lima may shared the same views of stopping criminality which is now a common thing in the Philippines. However, to stage each of their method is another issue. De Lima has her party expressing support on her candidacy. While Duterte alone and his solid standpoint was able to get the people's approval.

Thank you for reading Watch! Leila de Lima Political Ad is Like Short Action Film posted on the website Kwentology if you want to redistribute this article please include the link as the source. Have some kuwento to share? Contact us!