Filipino Snatcher Beaten Up by the People ~ Kwentology 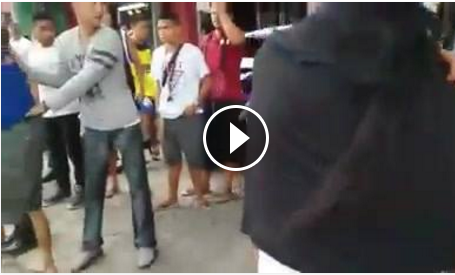 Filipino Snatcher Beaten Up by the People

There is no doubt that Philippines is one of the country with the highest crime rates. From murder, hold ups, robbery, rape and other unspeakable offenses.

Newly President-elect Rodrigo Duterte is seriously tackling down these lawlessness occurred in different parts of the country. Since then, there were reported numbers of killings involving drug syndicate, drug users, and wanted criminals as he taking the presidency. Duterte also aims to stop corruption committed by the members of the public government.

The new Philippine President plans to restore the death penalty as retribution for these criminal offenses. Cleaning up Philippines starts from the government itself. That is why the Philippine National Police (PNP) and other government agencies had been be subjected to random drug testing.

Duterte along with his reliable personnel doing their job to get the people's trust. So that soon people will voluntarily help them in their crime fighting.

With his strong personality, Duterte swiftly influenced the masses. Leading the community to act accordingly, the same goes to this snatcher who was beaten up by the public.

The video depicting a citizen arrest is getting rounds in the social networking sites.
The incident was recorded the 24th of June, around 11:58AM along St.James Mindanao Ave. in-front of Southstar Drugstore. A woman who was victim of snatching chase the culprit. Running out of luck, the thief was suddenly hit on the passing Montero Sports damaging the side mirror and the driver knocked him out for good. Passersby helped the victim and backed the driver whacking down the snatcher. Sometimes you have to give criminals a taste of their own medicine, in a million times.

Thank you for reading Filipino Snatcher Beaten Up by the People posted on the website Kwentology if you want to redistribute this article please include the link as the source. Have some kuwento to share? Contact us!