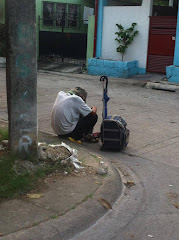 A Heart-Melting Story of Manny "Magpapayong" the Umbrella Repair Man

Yeah, it seems very related, but this story isn't just fabricated by the Disney Channel. Kids it is not about your favorite animated children's television program, Handy Manny.

The real-life handyman and his tools surely helps everyone whether it's rain or shine, Manny "Magpapayong" is at service!


I know this old man seems to be familiar with you specially those people who are living around Queensrow-Camella Springville and Greenvalley, Molino, Bacoor Cavite.

The story of Manny, a 71 years old repairman has been circulating in Facebook, captivates netizens as the old man staged a very heart-breaking footage.

Manny was seen walking on his way home while taking a short break in the sidewalk. People took a chance to approach the old man. Manny looks really exhausted and sick. It's very surprising and sad to see he is suffering. People who know him observed that the man is so different compare to the recent years. Manny holds a strong well-being, cheerful and likes to greet people back in the days. Truly age is a bad news for someone like Manny. 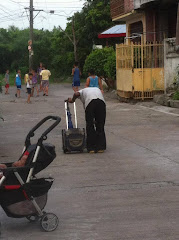 Everyone has a busy day, that we even failed to notice what's happening around us. Way back in time, people remember how strong Manny is while carrying his tools for repairing broken umbrellas, shoes and bags too. A kind of livelihood the man has started ever since and bore up until now, despite of getting older and weaker.

The old man refused to tell his last name, but he insisted people should remember him as 'magpapayong' (Umbrella man).


A Walk for Life

The photos and video getting rounds in Facebook about Manny "Magpapayong." The video depicting how Manny walks, hunchback-like figure as he takes every footsteps. It's very difficult for an aged person to do that tough job. But no one has the power to stop him because that's the only way Tatay Manny and his family survive the daily living. Tatay Manny has to stroll everyday to get a customer, the fact that he needs to endure the summer sun or rainy days. And do you know how much is his average earning for the day? A proud old man answered, it's PHP40.00 (forty pesos).

Tatay Manny has two children but also unable to provide financial assistance. It was later revealed that Tatay Manny and his wife are both suffering from high blood. The reason why he have to work everyday for the health maintenance. As long as he has strength left to walk, Manny will never gonna surrender.


Tatay Manny "Magpapayong" For Now On, You are Not Walking Alone

If there's anything you can do for him please don't hesitate to make it happen. Hopefully, Tatay Manny's story will reach out the government and other assisting organization. Let's help by praying for Manny and his wife for safety and health.

A rich or small things sure can bring back Manny "Magpapayong" sweet smile. God will bless you as always, Tatay Manny.

Thank you for reading A Heart-Melting Story of Manny "Magpapayong" the Umbrella Repair Man posted on the website Kwentology if you want to redistribute this article please include the link as the source. Have some kuwento to share? Contact us!