"Pee Spray" on the Face of Baron Geisler ~ Kwentology 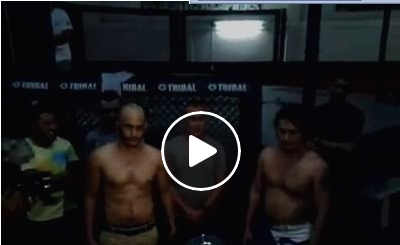 "Pee Spray" on the Face of Baron Geisler

Right after actors Baron Geisler and Kiko Matos officially signed for the deal to continue their face-off in mixed martial arts URCC Fight Night event. The two again shown up for their formal weigh-in that ended up Matos to surprise Geisler with 'pee spray.'

According to the organizer, the two-round Baron Geisler versus Kiko Matos exhibition match is going to happen on Saturday, June 25 at the Valkyrie Nightclub in Bonifacio Global City (BGC), Taguig.

The media photo op occurred earlier this Friday, at the BAMF Center in Parañaque City. This is really a trending match that Universal Reality Combat Championship (URCC) 'Fight Night' staged seriously since the two were previously involved in a fist fight at Tomatokick bar in Tomas Morato.

This is how crazy men settle things up!

But wait! Matos got a score already by grabbing something behind his back. It's too late for Baron, dodging is futile and he was caught off guard. Matos made Baron bent out of shape after saying that the spray bottle contains his own urine. Lol, the battle of whiz!
Pissed off Baron wants to start the fight before the expected time, and then, the two were separated immediately.

Baron Geisler and Kiko Matos "Bigwasan" match will be available via Action HD on Sky Cable, and ABS-CBN Sports.

Thank you for reading "Pee Spray" on the Face of Baron Geisler posted on the website Kwentology if you want to redistribute this article please include the link as the source. Have some kuwento to share? Contact us!