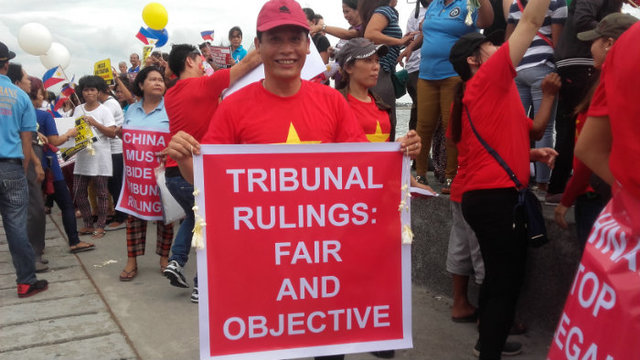 China opposed the decision of the Permanent Court of Arbitration in connection with its decision in favor of the Philippines.

Based on the report of the Chinese News, Vice Foreign Minister Liu Zhenmin said that the judgment benefiting the Philippines was rejected by China saying that the verdict is solely controlled by the court.

What? In what way does China wants to end this conflict? The fact that Philippine made its way to international court and democratically sued China due to its aggressiveness. Are Chinese people twisted enough resorting to end this disagreement into some kind of violence? Philippines can't afford to wage war, the nation isn't capable of doing so. That maybe the reason of China's stubbornness, knowing that similar countries can't commence war against them. Beside, it's United Nations job to govern the situation and give closure about this matter. Unless, China continually deny the U.N. existence.

Well, right is might! But unfortunately the job isn't done yet. Although winning the Hague means a great advantage for countries being jeopardized by China's intrusive reclamation such Japan, Malaysia, and other nation surrounding China sea. China has a solid belief on the occupied territory. I guess, it's hard for China to voluntarily surrender those islands, packed up their things and go home for relaxation.

Liu boldly asserted that the Philippines and other countries allegedly gave bribes in the International Tribunal to bagged China on the court decision. Liu explains that the four judges of the Tribunal Arbitral came from the countries of the European Union, while its Chairman resided Europe for quite a long time.

He specifically accused the former President of the International Tribunal on the Law of the Sea, which is Mr. Shunji Yanai, who he believed controls the process of the Court.

China initially ignored the power of Permanent Court of Arbitration and any decision from the judiciary must be disregarded.

Thank you for reading China is one of UNCLOS Signee and Must Acknowlege the Arbitral Court Decision posted on the website Kwentology if you want to redistribute this article please include the link as the source. Have some kuwento to share? Contact us!