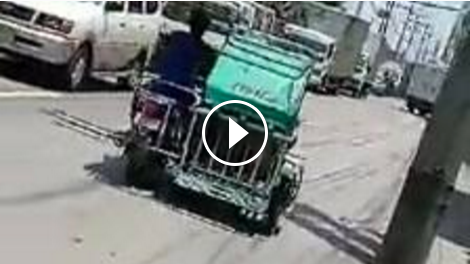 Do you have any plan of coming to Manila, and is this your first time? Well, a guy on Facebook cried foul after riding a colorum tricycle in port Pier 4 in Manila. A man named JV Bue posted his recorded remarkable experience after that colorum tricycle driver he was riding on chased him with an ice pick.

The story started after arriving in Manila. JV Bue was looking for his way to Divisoria when a tricycle driver offered him a ride for only PHP20. Then, along their way the driver immediately asked him for the payment. The good guy is actually planning to give the driver a PHP50. However, the shady driver insisted that he should pay him a PHP250. The commotion lead for JV to voluntarily get off the three-wheeled motorcycle. But instead allowing his passenger to safely leave his vehicle, the driver scared the poor guy pointing his deadly ice pick towards JV.

The passenger quickly ran into crowded area but the colorum tricycle driver followed him. The oppressive driver later hid his weapon by tucking it behind his back. The extorting intention was failed, and the scene was recorded. The driver's wife went after JV Bue, in attempt to stop him from filming the incident.


And it's very unusual for a driver to ask already for the fare in the middle of the trip. This made me think that something was going wrong. I then later found out that his trike was not registered and his clothing were inappropriate which could invite police to apprehend him, to which, Binondo was filled with many policemen. So this man was all along planning to get my money and ditch me before we even reach Binondo. And he would use his icepick to scare me away.

Unfortunately, the vehicle was unregistered, any valid information that could help the victim to sue these wrongdoer were off-track. But what happened to this guy contributes a clear information that everybody must be vigilant and wary while travelling the Metro Manila.

Thank you for reading Watch | Port Pier 4 in Manila Welcomes a Newcomer with a Very Traumatic Experience posted on the website Kwentology if you want to redistribute this article please include the link as the source. Have some kuwento to share? Contact us!