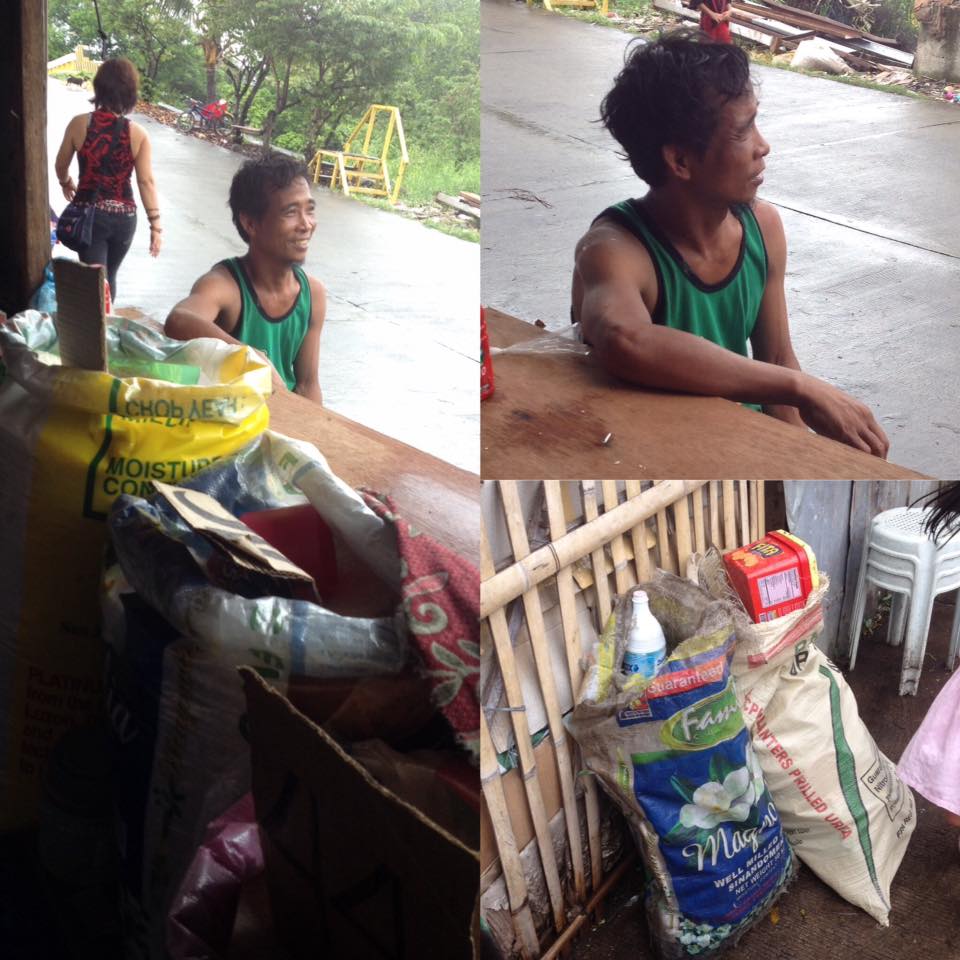 This story is originally posted in Facebook, and becomes viral since it is rapidly circulating around the social media. It was written by Krizna Gia Laguyo Narciso, we're not really sure if she was the exact writer though the most hits of likes and shares were coming from the Facebook user, herself. So, let's assume that we cleared ourselves away from authenticity issue.

The story is so heart-melting that netizen are sympathizing the man who is dealing with grievousness, and losing his loved one. It is written in Hiligaynon (Ilonggo native dialect). I will try my best to translate the story, please bear with me, English is my third language, expect grammar errors anyway.

The spoiler below contains the original write up, click to expand.

~ source: Krizna Gia Laguyo Narciso
Before heading to the story let's check first the most accurate meaning of 'wrongful imprisonment'.

While attending over and lying inside my mom's junk shop. A man passed by and asked me, "Miss, are you buying scraps?" In a lambing (sweet or tenderness) way of tone ~ I answered, "Yes mister, but the owner isn't here yet since they are collecting other junks." And he answered back, "OK, then I just have to wait here anyway." Then I replied, "OK mister, have a seat."

After a few minutes he started blabbering something, I thought he is mentally ill or drugged but I keep on listening to what he says, and he said, "Indeed, you are poor, a man collecting junks for food, but then just tipping off a woman for unconsciously dropping her phone on streets you will then subjected to police intimidation, threatened to shot me and directed to poured out everything inside the sack I'm carrying on which is full of rubbish. Is this really how unjustful nowadays? He must be reported to Duterte! So that he will be taken out from his position. I am upset, why do they have to miserably treat such poor people?"

After hearing his story I only nodded at him, maybe he's just freeing himself from what happened this morning. Later on he started to open up about his life. "Miss, your shop wasn't it located at the frontal alley before? You moved here? I am glad to find you here anyway I stopped scavenging because I was imprisoned for 2 years."

I am still calm and keeps on listening to him. I don't usually talk to strangers, but he caught my attention to hear him out. That's why I started to asked him some questions. "Why you were imprisoned?" (while pampering my tummy). And the man answered, "Because I killed someone in Victorias." I stared him in the eyes, and he told me everything that happened.

I listened to him to learn more about the truth why he resorted to kill someone. He said, "My wife was crippled and blind, she was a beggar and I am a scavenger, then with just a small plastic pouch of money they took it away from her. Because miss, they were in drugs. I am glad that it is Duterte now a president, and now they are gradually disappearing. That is why I killed an addict because of what they did. I was imprisoned for 2 years, in the end I proved my self, it's not my fault and I never attempted to escape either."

I continue listening to his story, I asked him, "So Mister, where is your wife anyway?" He replied, "She died already, she was hit by speeding vehicle while I was in prison."

As our conversation continues I started to feel sorry for him, that feeling of losing someone so dear and you were not there because of imprisonment.

He never cease to tell his life, he even stated that he was born out of nothingness. His mom was mentally distracted because of drugs, and was killed while he was 2 years old by jumping into the sea. He don't have any family, aside from his mom who died out and her name was Juanita Labricang and this poor man named Nico Yangyang, from Palawan. He stayed here in Bacolod for quite some time because his better half lives here.

I asked him, "Do you have any plan going back to your family in Palawan?" He responded, "Yes miss, sure! But I don't have the money yet, this is the only way I do for my living."

If you find him wandering around your places, it would be a big help to hand him over your recyclable plastic scraps such as plastic bottles. He sold all of his collected scraps, in total he earned only PHP32. He don't have any idea that I took some of his photos. Well, I'm hoping that with these, for at least we can find the way to help him out. Maybe, someone from Palawan is looking for him, his family.

Despite of the harshness life threw at "big bro Nico", he never stops from being happy and pure.

Thank you for reading After Killing Drug Addict, Ilonggo Scavenger Tells His Tragic Story of 2-Years Wrongful Imprisonment posted on the website Kwentology if you want to redistribute this article please include the link as the source. Have some kuwento to share? Contact us!