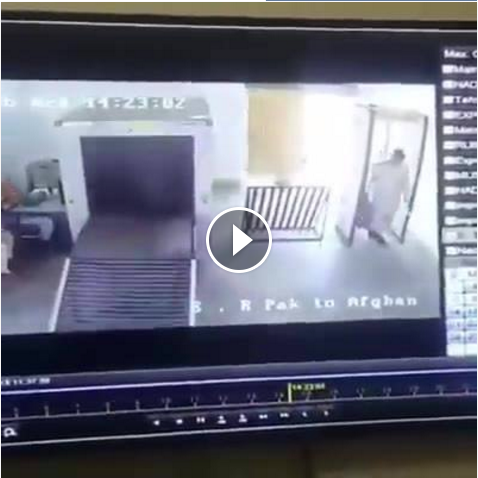 On the video, a man with accustomed clothing similar to Pakistanis missed the baggage inspection. He was then intercepted by the security personnel and asked to have his luggage undergo the X-ray scanning.
The guy however seemed to misunderstood the given instruction, and then he gushed himself inside the X-ray scanning machine. The incident surprises the on-duty security personnel.

The recorded CCTV footage have a comedic impression but some netizens are concern about radiation the man scored from the X-ray scanner. Although, one Facebook user commented that airport X-ray equipment has less active radiation compare to those in the hospitals.

The video has many uncertainty, popping up some questions to where and when did this exactly occurred. The cues however prompt that it was recorded only this year, "Afghan" may point the location for Afghanistan (it's not really sure though), and the clothing resembles to Pakistan.

DJ SADIC did not disclaimed as well if the video was only taken for franks or genuinely it really did happened somewhere in any Arab airports.

Thank you for reading Watch | Man Scans Himself by Entering X-ray Machine On His Very First Time Airport Experience posted on the website Kwentology if you want to redistribute this article please include the link as the source. Have some kuwento to share? Contact us!

How did you make your blog so short and well-defined? Where did u get your domain? Are you paying it yearly? How would u know your page views???