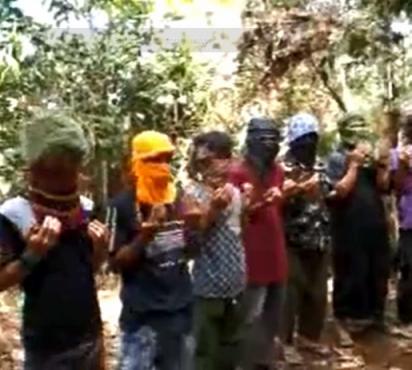 Deception by falsifying religion, that is the top factor of how Abu Sayyaf Group (ASG) managed to recruit new members. Deceiving people to believe that killing is not a big deal, "There is nothing wrong with murdering another human being."

Asgari, a member of terrorist ASG fully believes that Abu Sayyaf doings are just and right. Supposedly, they only kill evil people whoever the victims are.

ASG members often get the same preach. "There's nothing wrong in killing people," an absorb knowledge from the teaching of their leaders.


Absurdity; The Basic of Terrorism

Spoke in his local dialect, Pauji Asgari, a member of Abu Sayyaf, was wondering why he was arrested by the soldiers.

Unwary about his actions, arrested member of the Abu Sayyaf Group (ASG) confessed that he didn't know that they're doing the wrong thing and illegal. Learning the world of humanity surprises him for why he was arrested by the authorities.

Thank you for reading Member of Abu Sayyaf Group Confessed that There is Nothing Wrong with Killing People posted on the website Kwentology if you want to redistribute this article please include the link as the source. Have some kuwento to share? Contact us!