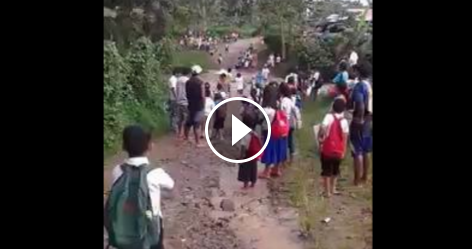 Furious netizen bashes the local government of San Jose, Lemery in Iloilo for failure to address the critical condition of students every time heavy rain pours in.

The massive volume of rainwater causes the river to overflow which is too dangerous for children to pass through. However, some locals from Brgy. San Jose, Lemery confirmed that such problem is already known to the local government. But up until now, there has been no action from the accountable officials.
Facebook user Beltran Atordido uploaded the video filming school children trying to cross the powerful gush of floodwater.

San Jose, Lemery is located in northeastern part of Iloilo, under the 5th district administered by the ongoing Mayor Ligaya P. Apura. Iloilo is considered to be the bailiwick of known politicians like Senator Franklin Drilon and Former DILG Sec. Mar Roxas and netizens are also looking for any post contributed efforts from these legislators.

Many are suggesting that this negligence should be reported to the Philippine National Hotline 8888, a 24-hour direct hotline for public complaints.

The video where school children of San Jose, Lemery in Iloilo crossing the overflowing river garnered 22,000 views, 264 reactions, and 862 shares as of the writing. The video footage surfaced online yesterday October 13, 2014 at 12:53am.

The hearth melting scenery caught the attention of many, bearing neglected plights of children, teachers and local residents.

Since the video gathered enough online concentration, netizens are looking forward to a just and right government public service.

Thank you for reading Video | Overflowing River Threaten the Lives of School Children in San Jose, Lemery, Iloilo posted on the website Kwentology if you want to redistribute this article please include the link as the source. Have some kuwento to share? Contact us!