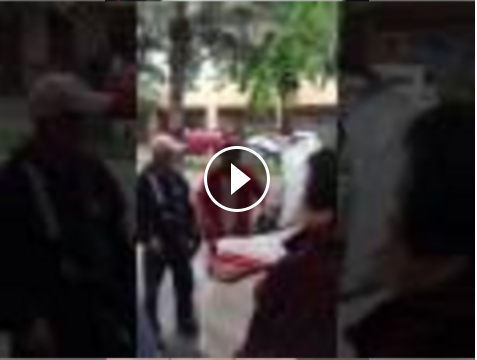 Another video is now circulating online filming an unfortunate situation for the two elderly couple being forcibly disembarked from the taxi right after they refused to go on the contract.
Instead of relying on his installed taximeter, the cab driver asked his two passengers for a ride in a term of contract. However, the old man declined the deal. With this rejection, the fuming taxi driver immediately off-loaded all luggage and suitcases of these poor aged passengers.

President Duterte on the other hand ordered to forbid contracts for the ride. Plus, any taxi driver who refuse to accept passenger will face penalties, fines, and a possible termination of a driver's license.


D'AVIS Taxi Driver "in the Hotseat"

Netizens heated up watching this video, addressing the Land Transportation Franchising and Regulatory Board (LTFRB) to bring a proper disciplinary action against the driver and its taxi operator.

Some suggested that if only this elderly couple aware of technology about UBER or Grab-a-Taxi. The situation like this might had been avoided. The discussion even raised up comparing traditional taxis versus UBER/Grab. The threaded comment appeared that everyone is agree with these App-based transportation services.

The said video captured the name and plate number of the taxi which was successfully shared by concern netizen on the Facebook. It is under the name of D'AVIS Taxi with plate number UWN-305. The incident occurred at the front of Mercury Drugstore, EDSA Crossing, Pavilion Mall, Greenfield District, Mandaluyong City.

Thank you for reading A Great Deal of Attention for D'AVIS Taxi After Rejecting Two Elderly Passengers posted on the website Kwentology if you want to redistribute this article please include the link as the source. Have some kuwento to share? Contact us!