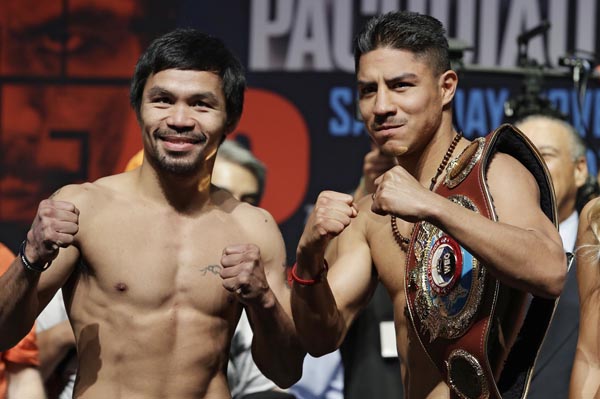 Manny Pacquiao A Boxing Hero Aims to Carve Another History

The boxing match between Manny Pacquiao versus Jessie Vargas is one of today's heroic events. The multi-division world champion Manny Pacquiao is optimistic about the idea of being the first elected Philippine senator to win a belt for legacy by facing WBO welterweight titlist Jessie Vargas.

The fist fight is currently held at the Thomas & Mack Center in Las Vegas, Nevada, USA.

The three-time Fighter of the Year and reigning Fighter of the Decade (2000 to 2009) Manny Pacquiao is a 7-1 preferred fighter to defeat Vargas and grab the 147-pound belt.

If PacMan managed to beat Vargas, this would be the third time he claimed a 147-pound belt in his intense 21-year boxing career. Manny Pacquiao currently has a record of 52 wins, six losses and two draws.


The Desire for the Classic Knockout

Definitely, the hero champ Manny Pacquiao will never be satisfied with unanimous or split decision win. Including himself, everybody is craving for another knockout victory after straight seven years of 11 elusive bouts.

And it looks like Pacquiao decided to carry it out. The fighter engaged in a harsh training under coach Freddie Roach completing mitts sessions and broadening his movements inside the ring.

Thank you for reading Manny Pacquiao A Boxing Hero Aims to Carve Another History posted on the website Kwentology if you want to redistribute this article please include the link as the source. Have some kuwento to share? Contact us!