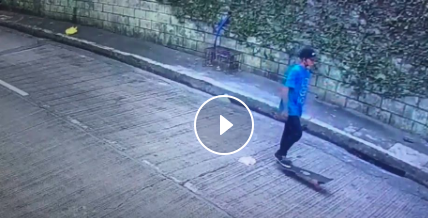 A Filipino broadcast journalist, writer and a freelance filmmaker Cesar Apolinario had recently uploaded a video on his Facebook page filming how skateboarding exploited on burglary.

The video recorded the whole break-in robbery and documented it within 58 seconds time-frame.

Apartment of police in Quezon City, robbed by skateboarders!
It was noon time when these two men busted one of apartment in Barangay E. Rodriguez, Quezon City. They bluffed their way of operation by go on disguising as few people who are passionate with skateboarding.

When the right timing kicks in, one of them will breach the residential compound. Meanwhile, the other one will remain outside to serve as a lookout. The suspect immediately moved to the second floor but failed to steal in one of the floor unit. So, he advanced to the third floor, then took a quick glimpse at the window nearby checking the outside situation.

Later on, he approaches the CCTV and changed its location in order to conceal his thievery. After almost five minutes, he went down carrying a bag full of stolen items.

The victim said to be a police officer refused to give a statement.

Thieves snatched away the firearm magazine, cell phone, and other gadgets. Authorities have yet to identify those criminals.

Crimes like robbery which involves skateboarding angers people who are devoted with such sport. Due to the damaging act, street skateboarders may suffer from the public perception.

Although, some people are trying to create a good image for skateboarding, these two robbers blew everything up.

Thank you for reading Video | Watch How these Thieves Damaging the Image of Skateboarding in the Philippines posted on the website Kwentology if you want to redistribute this article please include the link as the source. Have some kuwento to share? Contact us!