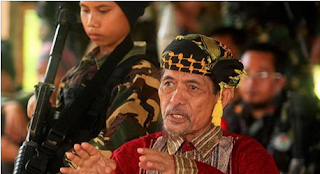 MNLF chairman Nur Misuari straightforwardly pointed Malaysia was involved in kidnapping for ransom activities. Misuari made this vocal declaration in their joint statement of President Rodrigo Duterte in Malacanang Palace.

Misuari stated that someday he will file legal suit to the International Criminal Court (ICC) to charge their leader.

According to Misuari, he holds all the evidence, witnesses and also have staff to prove his allegations that all the attacks were paid by Malaysia.

Misuari cited the Sipadan hostage crisis where few of his cadre officers involved and received bribes from Malaysia. In which he said condemns the MNLF for the kidnappings.

Thank you for reading Nur Misuari Claims Malaysia was Involved in Kidnap-for-Ransom Activities posted on the website Kwentology if you want to redistribute this article please include the link as the source. Have some kuwento to share? Contact us!