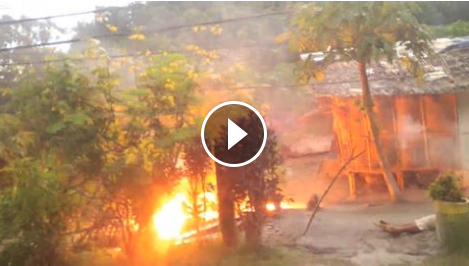 At the same time, her mother identified as Rosita Salibio, 41 years old, and 7 months pregnant escaped the deadly incident, and she is currently recovering from her injuries.

The incident happened this morning at around 9 o'clock of the morning after power lines that straightly connected from the AKELCO electrical power post was a severed. According to witnesses, they heard a explosion from the pole of AKELCO and surprised that the people on the street are panicking.

With the coordination from the head of the family, Ludovico Salibio, he stated that they've tried to save these victims but failed to give an immediate treatment due to the powerful electrical voltage from the severed power lines dangling on the ground of their residence.

It was found that the victim Matillano was just visiting the house of Salibio Family to buy a papaya. By chance, those broken electrical wiring fell on the place to where she was standing.

Rosita Salibio was transferred immediately to Sangka Hospital in the town of Kalibo for more proper treatment.

Thank you for reading Actual Video | Boracay residents electrocuted after live wire fell from the pole killing the victims posted on the website Kwentology if you want to redistribute this article please include the link as the source. Have some kuwento to share? Contact us!