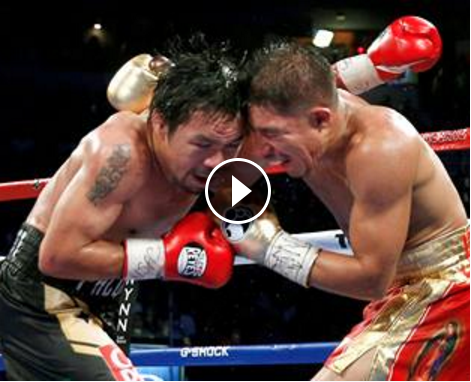 At the opening bell, Pacquiao burst in at full speed extensively tried knocking down Vargas. He gave a straight left that squashed Vargas but the defending champion immediately stood up to continue the match.

In the second round, Pacquiao overturned the towering Vargas. PacMan consecutive strikes against his opponent brought facial damages to which favored him the decision on claiming the title.


I feel I could do more but every round I tried to knock him out.

The eight round is said to be the intense part, when Vargas managed to launched some strong punches against Pacquiao. In the end the two fighters exchanged powerful blows. It is also when Vargas got his right eye bleed due to the accidental clash of their heads.


Fighting Manny Pacquiao is like playing a very fast game of chess. You have to be alert at all times, there are a lot of punches coming in. He was very fast and he was very sharp.


Ruling Out for a Rematch?

With this fateful event, Mayweather witnessed Pacquiao wins over Vargas. The undefeated retired champion that once fought with Pacquiao seated at the ringside. Pacquiao added that he invited Floyd Mayweather. Mayweather leave commentary on PacMan's victory by saying "not bad" after giving a thumbs up.
When Manny Pacquiao asked about the possibility of another boxing match against Mayweather? The People's Champ flat out by answering, "We'll see."

Thank you for reading Replay | Watch Pacquiao vs Vargas Full Video posted on the website Kwentology if you want to redistribute this article please include the link as the source. Have some kuwento to share? Contact us!