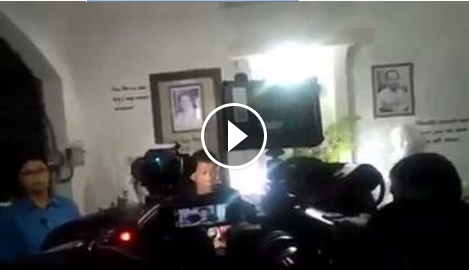 Video | President Rody Duterte On His Trip To Malaysia Soon

The Philippine President Rodrigo Duterte is about to take another state visitation right after China and Japan.

The next target, Malaysia!

The President Duterte confirmed that he is going to visit Malaysia and have a meeting with Malaysian Prime Minister Najib Razak to discuss problems in series of kidnappings and piracy in the Malacca Strait.

President Duterte said it is important to stop such lawlessness because these critically affecting the commerce and security in the area.

This Halloween season, the Philippine President reached out Davao City to solemnly pay a visit to his parents funerary grounds. Later on, he actively joined to tough-pressing journalists and answered some fault-finding questions. With these interrogations, the president felt responsible and ashamed that rebels and bandits find their refuge in the province of Sulu, affirmatively in the territory of the Philippines.
President Duterte is scheduled to visit Malaysia on November 9 and 10.

Also, the President is expected to visit Thailand to send condolences to the death of their king just recently.

Thank you for reading Video | President Rody Duterte On His Trip To Malaysia Soon posted on the website Kwentology if you want to redistribute this article please include the link as the source. Have some kuwento to share? Contact us!