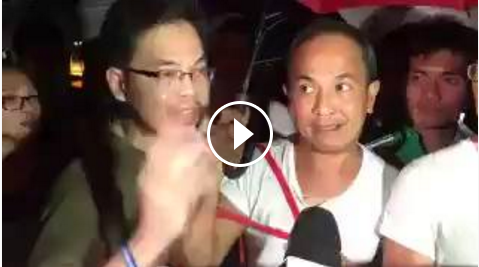 The grand Black Friday event of anti-Marcos rallyist in Luneta yesterday was filled of surprises. It was social media that played the major role in terms of accumulating people to participate.

However, that fateful day was not only meant to solely relish anti-Marcoses group. Marcos supporters gathered as well to make the situation even. The clash between the two parties cannot be avoided. To settle the disagreement in a peaceful manner, the both anti and pro-Marcos groups agreed to go on a debate.

It appears that the discussion is not in favor for the anti-Marcoses. Rallyist of Marcos supporters nailed the opposing groups with their breathtaking sentiments.
With these overwhelming statements uttered from one of the Pro-Marcos advocates, leaves anti-Marcos scrambled to find the answer, yet stuttered to rebut. Maybe this is one of the reason why the majority of Filipinos nowadays refuse to join an anti-Marcos rallies.

Does the counter declaration proves that anti-Marcos really are selective after all? There are other people who are still alive and accountable for those Martial Law political crimes. But why suing only Marcos, given the fact that Enrile once challenged these anti-Marcos to file a legal battles against him and he is willing to face them in court?

Thank you for reading Video | Watch! Pro-Marcos Slam Anti Marcos Protesters During the Fateful Black Friday Rally Event in Luneta posted on the website Kwentology if you want to redistribute this article please include the link as the source. Have some kuwento to share? Contact us!