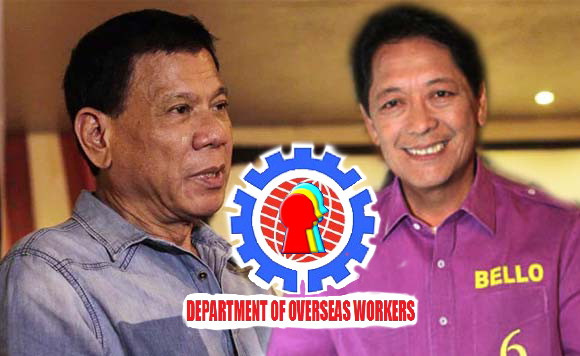 The Labor Secretary ruined the very hope of every OFW scattered around the globe when he opposed the plan of building a one-stop department that will focus solely on the needs and interests of Filipino overseas workers.

Bello reasoned that such department is not needed. The secretary added that Filipinos must stay only in the Philippines building such agency is not worth considering. "Don't go working abroad", is that what you want to say Mr. Secretay Bello?

He mentioned that while Filipinos chose to work abroad, these people are more likely to abuse by foreigners. Also, building a separate department for OFWs simply means that government is driving more Filipinos to work overseas.

With his egocentric perception, OFWs have a few question for Labor Secretary Silvestre Bello III.
Only to promote his ambition to stamp out Philippines from having a title of overseas worker/domestic helper capital of the world. The secretary refused to carry on the President Duterte's plan of having agency that caters only OFW's interest and safety. With the huge contributions of OFWs to the country's growth, now is the time for the government to show the gratitude by building a separate department for Filipinos working abroad.

Hopefully, the Labor Secretary Bello retract his decision, stop withholding the privilege of having the agency to assist Filipinos working abroad, and ratify the existence of OFWs.

Thank you for reading Editorial | Philippine Labor Secretary Blocked the Creation of Department of OFW posted on the website Kwentology if you want to redistribute this article please include the link as the source. Have some kuwento to share? Contact us!