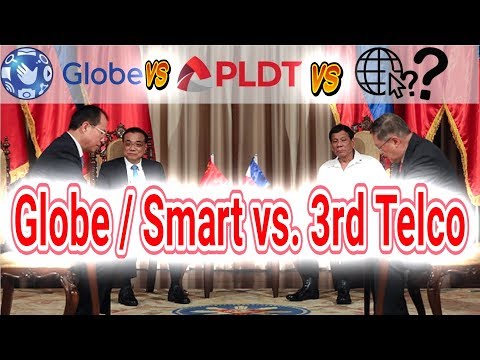 With the fast growing population of network users, the Long Term Evolution (4G LTE) services in the Philippines started to slow down. The country is also behind the tech due to the fact it needs to update to a fifth generation (5G) system to be at par with other countries in terms of speed and efficiency of service.
Communications Secretary Martin Andanar revealed that there are already four countries expressed interest to bid for the chance to be the third major mobile and data provider in the Philippines.

So far they are;These are the confirmed foreign companies interested in setting up their operations in the Philippines and help break the duopoly formed by PLDT Inc. and Globe Telecom in the telecommunications industry.


Telstra Was too Weak?

Do you still remember the recent rumor about Telstra being the probable 3rd telco for the Philippines? To tell you avid Kwentologist, Telstra previously tied up with San Miguel Corp. However, the losing company sold its telecommunication assets to both PLDT-Smart and Globe. It's a shame, the two telecoms previously won the market, and networks subscribers have suffer the negative effect of duopoly.


So, what are the benefits people can get with the third telco?

Filipinos are indeed delighted with the coming of the third telco. Also, the government under the Philippine President Rodrigo Duterte had already learned from the past. Government have to prevent future merging that may lead to duopoly, or the worst is monopoly in the Philippines telecommunications industry. So the third market player would also be asked to sign an agreement that prevents them from selling their firm to PLDT Inc. and Globe Telecom and any of its subsidiaries.

Along with the third telco, the Department of Information and Communication Technology (DICT) target is put up 30,000 free wi-fi hotspots this year and at least 250,000 by 2022.

There are some rumors that other companies may follow to join the bidding. Comclark Network and Technology Corp. (Converge) of Dennis Uy are now surfacing though the details are not yet final. ZTE however is not major telecommunications company so we will not going to see them on the bidding list but possibly they can supply broadband services and equipment.


They're Too Many for Filipinos

Why so many telcos? Does the Philippines need fourth telco and so on?

Philippines currently need a maximum of three telecommunications companies to operate. Four or more telcos can't be accommodated and it's not advisable at the moment because it requires huge investment. Taking into consideration, the size of the Philippine market, three players for the Philippines could be enough at this point.

Thank you for reading Breaking Duopoly in the Philippines Telecommunications Industry posted on the website Kwentology if you want to redistribute this article please include the link as the source. Have some kuwento to share? Contact us!