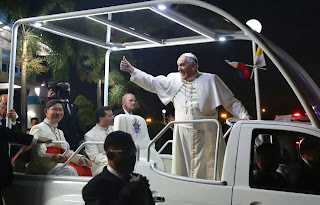 Pope Francis is in Manila, a festive atmosphere welcomes the Pope where he will stay at Apostolic Nunciature for his 5-days Papal visit.

"Viva Il Papa", "We Love Pope Francis", were just some of the shouts that we did to Pope during his parade across Manila.

Some of the people here were have been waiting since before dawn. The exhaustion is somehow worth it given a chance to glimpse Pope even just a few seconds.
As the news on the Pope's arrival in Villamor Air Base reached the metro area. The police barricades were not able to stop faithful Catholics rushing to Pope's motorcade.

More Filipinos are expected to participate in Pope Francis's Papal events in the remaining days.

The hundreds of pilgrims in Asia's one of the largest Catholic nation, looking forward to Pope Francis for inspiration and blessing.


Network Downtime But Why?

Cellular data, etheir the network signal are currently fluctuating in areas near Pope Francis. We are experiencing a 'no signal' issues due to the fact that this is a part of Pope's safety. No outbound and inbound communication is made for his security.

Even goverment authorities are asking for the crowd to participate and be vigilant for Pope Francis sake.

So guys, right after taking your selfie photos you might need to wait for few hours for the network signal to comes back online.

Thank you for reading Pope Francis Arrival in Philippines Causes Network Signal Outages posted on the website Kwentology if you want to redistribute this article please include the link as the source. Have some kuwento to share? Contact us!